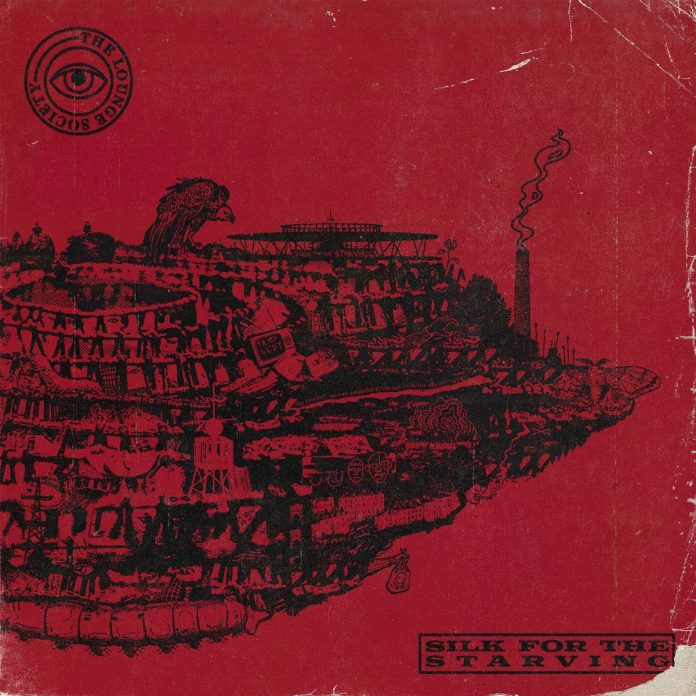 In my late teens music nigh on altered overnight with the influx of punk and new wave acts, the blending of political activism and music became the norm and bands such as Yes, Genesis and Emerson Lake and Palmer were confined to the scrapheap. Forty years on and thankfully we still have bands that continue to fly the flag of civil engagement set to music. One such is The Lounge Society who hail from in and around the Pennine towns of Hebden Bridge and Todmorden in the Calder Valley of West Yorkshire, This post-punk teenage quartet comprises Cameron Davey (vocals/bass), Herbie May (guitar), Hani Paskin-Hussain (guitar) and Archie Dewis (drums). The guys have a four track EP `Silk For The Starving` released this month.

`Burn The Heather` kicks us off and it’s a pulsating riff ridden number where the lyrics are shared virtually in a spoken word fashion not quite Mark E Smith but certainly heading that way. It`s a stinging diatribe on the use of local moorland for the pursuit of the gentrified sport of grouse shooting. The burning of the heather for the benefit of more grouse friendly vegetation leads to poorer soil conditions, pollution, fewer plant varieties and the death of many of the creatures that call the Yorkshire Moors home. A wonderfully danceable way of pushing home a point. In `Television` we have a song that was influenced by the American seventies group of the same name. it`s an interesting start stop affair with some acidic musings on the portrayal and use of the small screen with lyrics such as “genocide makes for good tv”

Another invective on media outlets comes with `Cain’s Heresy`, a portrait of the world we’re headed to as the band share. Cain and Abel were brothers at war and this song is our last stand in the war on culture which is being waged by corporations at the moment. We enjoy a further uneven offering with some quite hypnotic guitar chords, driving drumbeats and vocals that build as the anger is vented and released. The last minute or so is a quite trippy affair and becomes almost a musical jam session. We close out with `Valley Bottom Fever` which according to the band depicts life in a “lonely town with a lonely state of mind” and tackles the subject of the twisted mindset that takes hold when one doesn’t leave the sun-starved place in which they live often enough. In Calderdale they call it valley bottom fever. At just over two minutes we have a searing fast paced up and at `em punk stream of consciousness.

`Silk For The Starving` for me is a cracking introduction to this politically driven post punk outfit. If you’re a fan of The Blue Aeroplanes and Gang Of Four but want something with a little bite, these are your go to guys.