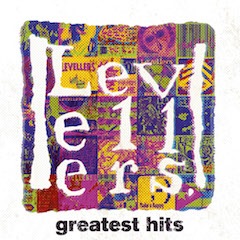 Musicians Mark Chadwick and Jeremy Cunningham met in The Eagle, a pub in Brighton, in 1988. Discovering that they had a fair bit in common, including a left wing view of politics, they decided to form a band.

So says the opening line on the About Us Section of the Levellers own website. What it doesn’t say – but it should really – is that for the intervening 26 years the band have set about making records that sounded exactly how they wanted, with scant regard for trends, outside influences or just about anything else.

This philosophy even extends to their greatest hits. With some bands it would be stopgap, some filler, a contractual obligation to make some cash. Not this band. Rather, upon hearing that their former record company, Warners, were intending to stick one out, rock’s biggest cottage industry said “no thanks, we’ll do it ourselves.”

The result is this hefty 2CD and DVD compilation (the iTunes version helpfully collects together essentially every single piece of music they’ve made and gives it you for £30) of lovingly remastered stuff.

As always with these things the aim is three-fold. First, they want to attract fans, so a new generation can perhaps be inspired by songs like “One Way” and “What A Beautiful Day” (with its key line, “nothing is impossible in my powerful mind”) as a previous one was. Then of course they want to get the lapsed fans back, and listening to this collection, it is striking just how many great songs The Levellers have got, but then – and here’s where things get really interesting – how do you get your existing audience to buy it? A band such as this wouldn’t rip people off, so they came up with something, as you would expect, just a little bit different.

What they did was rope a few of their mates in to sing their favourite Levellers song, with the twist that the Levellers themselves were the backing band. The idea works fantastically. Frank Turner adds his sound to “Julie,” Imelda May gives “What A Beautiful Day” a jaunty makeover, while Bellowhead do “Just The One” in a way only they can. Best of all, though, is Billy Bragg’s take on “Hope Street,” which always sounded like the type of song he’d write anyway, it is a superb end to the record.

Elsewhere, there is a staggering array of styles here – from the Beatlesy “Happy Birthday Revolution, ” the bigger rock sound of “Last Man Alive,” to the opening track on the collection, “Fifteen Years” which is basically 1980’s rock given a folky twist and the pulsing “The Cholera Well” which is arguably the best thing here, with its anti-war standpoint.

One thing that all these tracks have in common, though, is that they are focused on people, whether it’s their struggles or their lives, or just their stories. All of the songs are real in the sense that there is real substance here, this is not throwaway pop music, this is not a superficial band.

Which is precisely why The Levellers have endured for so long, and why they remain so vital – as this collection proves.