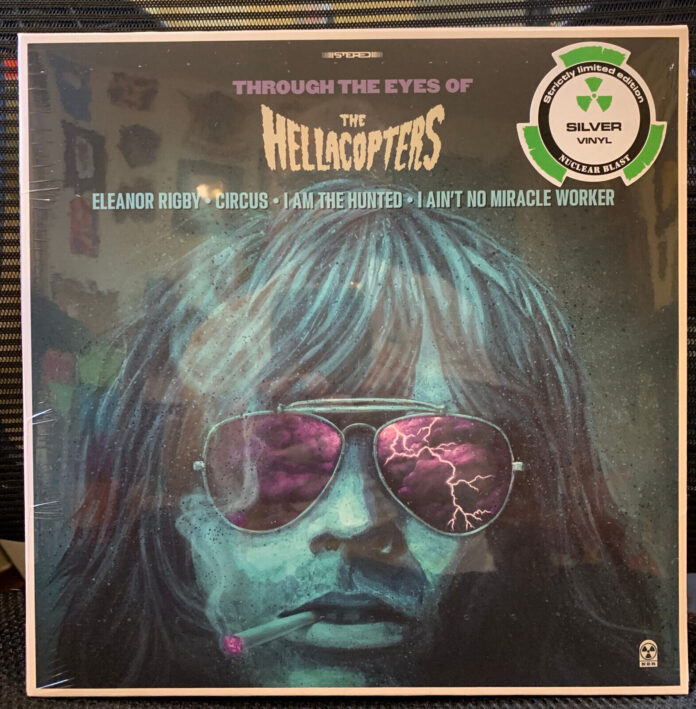 I didn’t watch the TV coverage of Paul McCartney at Glastonbury (watching a load of lentil eating Guardian readers watch music in a field isn’t my idea of fun) but I read enough about his performance to know that it split opinion.

I also knew that as soon as an ex-Beatle was back in the news I was set for a week of “how can someone who does a music blog not like The Beatles?” off a load of people who get their music off Radio One.

My answer is always that I appreciate their legacy, their influence on modern music and all the rest of it, but I like rock n roll and music that means it.

Rock n roll covers of the moptops, mind? Well they’re alright, as I’ve proved when I reviewed an Enuff Z’Nuff album that was a collection of Beatles songs, and “Through The Eyes Of The Hellacopters” begins with one. “Eleanor Rigby”.

My dad’s favourite Beatles song, no less. I might have liked the original if it had a tiny bit of anything about it. Nicke Andersson, mind you. He can make anything rock. That’s what they do here. It’s rather good, frankly.

So is the rest of the EP.

Look, it’s the Hellacopters. I don’t “like” The Hellacopters. I love the reprobates. Back in the spring they released their first record in donkey’s years, so this four song thing was always something to look forward to.

What is interesting, though is the songs they’ve picked. If you know String Driven Thing’s “Circus” before you listened to this, then fair do’s you’re better than me. Here, though, it sounds like the perfect latter day, mellifluous Hellacopters. Dregen’s guitar solo alone is worth buying the thing for.  For clarity, I’ve listened to it since and the original sounds a bit like this, just not as good.

I’m perfectly familiar with GBH’s “I Am The Hunted”. They’ve turned the intro into a bit more of “Saturday Night’s Alright For Fighting” here, and they’ve made it less thrash and less hardcore. And that’s sort of what they’ve done with The Brogues “I Ain’t No Miracle Worker” – just in reverse. It was a bit jangly and a bit psych before, its not now. It’s the Hellacopters, now.

The EP isn’t essential, let’s not pretend it is. 20 years ago, these would have been b-sides, and the postman would have been delivering them to me on import with the hundreds of other Hellacopters things I own. However, there’s no singles anymore (thanks internet, another thing you’ve ruined) so you get these brilliant versions instead. There might also be some stuff here to get you into some new bands. Just don’t bother with The Beatles, they’re overrated.