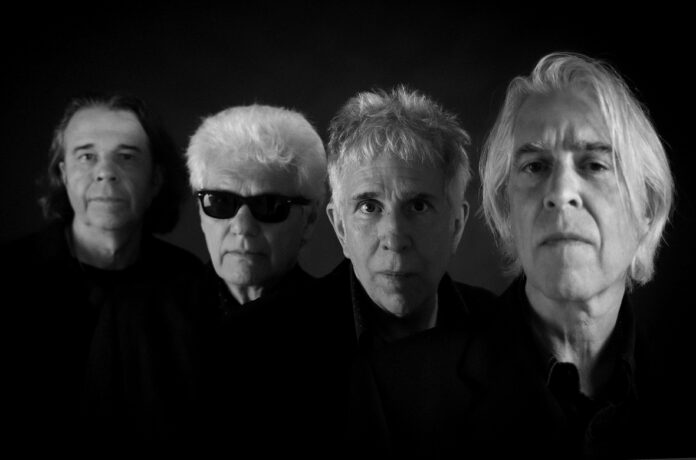 Pioneering Boston punk band Nervous Eaters, contemporaries of bands like the Ramones, The Police, Iggy Pop, The Pretenders, and a host of others, has released a new single, “Wild Eyes,” ahead of a new album due out this fall on Little Steven Van Zandt’s Wicked Cool Records.

The single features a B-side of perhaps the band’s most well-known song, 1976’s “Loretta.”

Of the new single, original frontman Steve Cataldo says, “Stevie Van Zandt chose “Wild Eyes” as the first single from our new album Monsters & Angels. A textured, melodic rocker that paints a portrait of a beautiful, complex woman who views life through the lens of her sophisticated imagination.”

The single is accompanied by a new music video, of which Cataldo explains, “Filmmaker Vincent Straggas created a compelling video for “Wild Eyes”. His idea to give the actress a camera through which she can capture passing moments conveys the intent of the song extremely well. She has a distinct, idiosyncratic point of view and experiences the world through inquisitive, open, wild eyes.”

Formed in the mid-70’s, the Nervous Eaters would eventually become the house band for the legendary Boston punk rock club The Rat, where they established themselves as a leading punk rock band in the Northeast, playing with a who’s who of punk and new wave luminaries, including The Police, The Ramones, The Cars, Patti Smith, Dead Boys, Iggy Pop, The Stranglers, Go-Go’s and many others.

The Cars’ Ric Ocasek produced the band’s original demos, which got the band signed to Elektra Records, and they went on to tour around the world. However, after a series of poor decisions on the part of the label, their major label debut album failed to deliver on the promise of their legendary live shows.

After dissolving the band, Nervous Eaters returned in the mid-80’s and has been revived over the years with various lineups.

The current version of the Nervous Eaters formed in 2018 and includes three other Boston rock vets, bassist Brad Hallen (of Ministry, Ric Ocasek and The Joneses), drummer David McLean (of Willie Alexander’s Boom Boom Band) and guitarist/vocalist Adam Sherman (of Private Lightning), and between them, they have recorded and/or toured with such artists as Ministry, Iggy Pop, Aimee Mann, Jane Wiedlin, Susan Tedeschi, Jimmie Vaughan, Lenny Kaye and many others.