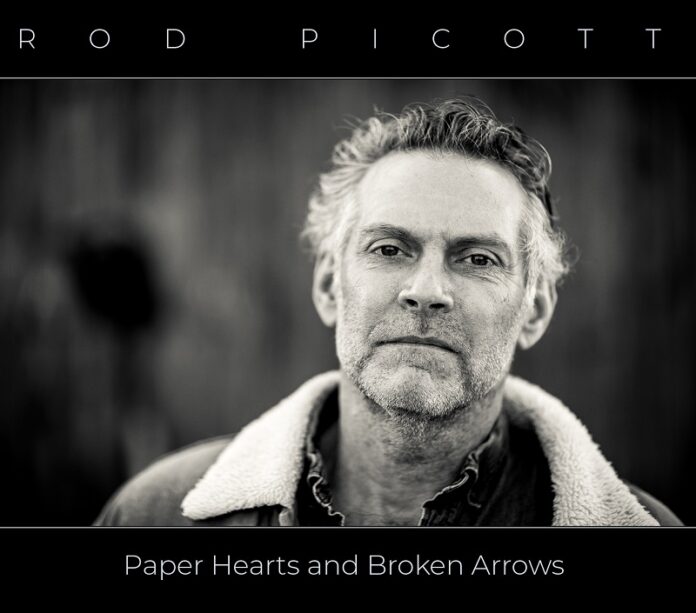 “Paper Hearts And Broken Arrows” is Rod Picott’s 14th album (give or take the fact he spent the lockdown’s writing personal ‘Best of’ records for people). I’ve reviewed a couple since I started doing this website. This one is the best so far.

I suspect that Picott, who can use words like few can, knows that too. Even the way he describes the songs here is astonishing: “I challenge anyone to explain the lightning that strikes when a new song is born. You catch a glimpse of the ghost, then chase it down until you’ve rendered your best sketch. Although the pandemic emptied out the wheelbarrow of my life as I knew it; I was simultaneously gifted with enormous amounts of time to dig in the dirt pile left behind.”

There is literally nothing I can say to top that. So all I can do as a mere mortal is to trawl through these 12 songs and attempt to tell you why they are so good.

And, in honesty, it comes down to three words: darkness, desolation and bleakness.

“….Arrows” exists in a place that is not catharsis, in a way that conventional singer songwriters do it, rather it explores the idea that this is your lot in life. It begins with the song “Lover”. Which luxuriates in a first line of “I’ve been without love for so long”. It also talks about “an ache in my bones” as if the weariness is incurable.

Indeed – and its hard to know with this type of record where the artist ends and the story begins – the songs here are bound together by a sense of struggle. “Revenuer” comes from a type of “Copperhead Road” ish ballpark, but middle aged women (my late mother included) are not line-dancing to this one, like she did with Steve Earle. HBO miniseries have less plot. Juan Soldazano’s guitar here is sensational, never mind the lyrics.

“Mona Lisa” is something that anyone lets say, of a certain age, might relate to. Fragile and vulnerable, it looks for love in realistic places, for sure. “You’re not the Mona Lisa…..you’re not a painting from a master” he intones (and its difficult to say Picott ‘sings’) in a way that only someone who had given up on fantasy might understand.

“Dirty T Shirt” is lust. Pure and simple. The guitar work is brilliant, so is the gentle chorus, but strip away the thing and the intent is clear. “Frankie Lee” is even better as it deals with the hopelessness of the character as he waits to be put to death. It’s the lack of remorse, the ‘what can I do?” air that strikes you. The acoustic playing is so well picked out – and its worth saying that it is a fact throughout that the music compliments the words so well.

“Sonny Liston” feels like the centrepiece of the album too. A truly harrowing quasi biopic of the heavyweight champ. “Nobody punched like Sonny Liston”, maybe. But no one had this life either. Guess where this record looks.

A longtime friend of Slaid Cleaves “Through The Dark” sees the pair resume their partnership, and this one is the most hopeful. You could see this on a Springsteen record, not something you could say about “Valentine’s Day” (perhaps on “Devil’s And Dust”?) but this is the sort of thing that blokes (and it is blokes) that scroll through their phones at 2am thinking of every woman they’ve ever known would be all over.

The harmonica drenched “Washington County” is arguably the best. A brilliant song about the people who have been left behind by trickle down economics and the neo-liberalism of Thatcher and Reagan. “Once a month we hit the foodbank” it says. “You can choose to move or just stay poor”. It should be played wherever capitalists congregate.

“Lost In The South” is underscored by some mighty lapsteel but the lyrics about the picket line are incredible: “Some poor bastard tried to break through. Got a haematoma and a private room” – and perhaps here, the undercurrent of struggle and violence is most to the fore.

There’s a light and airy feel to “Mark Of Your Father” as it looks backwards to go forward, before “Make Your Own Light” (another co-write with Cleaves) ends the thing on something of a positive note. The world is designed to conspire against us, it seems to say. But we have each other.

And perhaps, in the context of these songs, we have ourselves. Whatever struggles they are undergoing, either personal or collective, the characters here all have some hope left.

That seems to underscore “Paper Hearts And Broken Arrows”.  A brilliant record, it feels like a labour of love for the artist, and one that has been well-rewarded in the results.