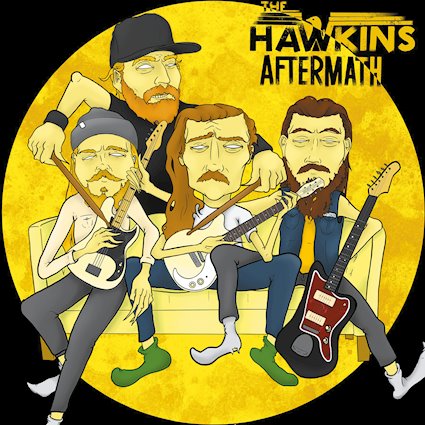 Strap yourselves in lads, “Aftermath” is a concept record. It is (according to the press release) “a conceptual mini-album, dealing with the destructive aftermath of past relationships.” My reaction to all concept albums (and sorry for boring regular readers) is “yeah sound, are the songs any good?” With this one, though, it was more: “that’s not a concept album, chaps, that’s every single rock n roll song. Ever.”

Ok I am being facetious, because The Hawkins lend themselves to this sort of thing by virtue of being slightly weird. Not massively, not Frank Zappa, but more the type of band where they are nearly like everyone else, but they just walk a slightly different path.

Take “Turncoat Killer” – the opening song – they walk out like Prize Fighters, and when they take their swings, it sounds a bit like Jet, but also it has the air of a 2 week meth bender. “Nothing gets me off like you do” offers the hook, and there’s something just a touch unhinged.

Anyway, she’s done a job on the boys (I’d never get myself in these situations, obviously…..) and as we move on, there’s a Coheed And Cambria type thing going on in “Fifth Try” – although to my knowledge, CAC have never gone all-in on a full rock n roll solo. This does. And it rules.

“Svääng” (turn around in Swedish) finds them in the grips of depression: “Just fucking die or try to get better” seems like a choice that isn’t a choice at all, but the song itself is a cracker of a thing. “Jim And Kate” gets funky. Sort of. Prog. Sort of. And is all sorts of things. It’s all fabulous, whatever it is, that’s for sure. It even namechecks last years “Silence Is A Bomb” album, meaning there’s probably a golden thread running through all of this if you look hard enough.

“Cut Me Right Off” is what happens when she finally stops replying to your emails for good. It’s also a ballad, if Tim Burton did ballads. And it explodes before it ends. Maybe the final mood swing? Perhaps, but then the title track follows. Electronic drums. Church organs, thunderous riffing. No words. Lord knows what it represents. The death of the relationship. The laying of it to rest. No question marks because anyone’s guess is merely a statement. Frankly only The Hawkins know – and they probably aren’t too sure.

So here it is, welcome to the strangest break up album ever. If you can fathom this and make it coherent you’re a better man than me. If you’ve ever thought someone should invent “prog n roll” then The Hawkins essentially have.