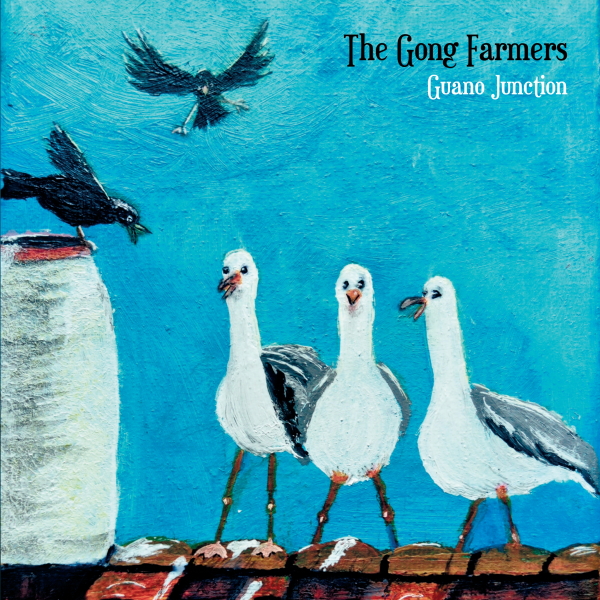 The Gong Farmers are principally two musicians, Mark Graham (vocals, synths, and guitar) and Andrew Keeling (classical guitar, piano, organ, and flute), along with friends and colleagues. Formed in 2018 following a visit to an Irish Castle, the band name was suggested by reading about the activities of the medieval gong farmers. Their second album `Guano Junction` was released last month and continues the connective thematic elements and themes of love and loss found on their first album `Ship of Fools.

The album opens with `As Sunlight Falls` which is a quite ethereal piece with a few lyrics shared about missing a special someone during its brief existence but it does paint a picture of a calming sunset. A distant flute and intricately plucked guitar chords introduce us to `Drive` before a saxophone joins and the number seems to awaken. We have vocals entering as well relating that the participants are only passing through. The track becomes quite jazz like and dreamily reflective before fading out.

The bizarrely titled ‘Pip, Squeak and Wilfred’ is another quite introspective and mesmeric number which enjoys a delightful string arrangement. Its a song inspired by Mark’s chance discovery of his father’s war medals which he refers to in the lyrics shared. We have an enticing tranquil and peaceful musical soundscape in `Guano Junction 3` that enjoys the talents of a variety of the musicians here with percussion and woodwind pieces all blending together.

`Evergreen` enjoys some synth waves or swathes and a strummed guitar but the real joy is in the lyrical content. It alludes to planting a tree from a shoot in remembrance of somebody close and returning as it grows and the seasons change and gaining comfort from its continued resilience. A violin takes the lead and this time portrays a musical instrumental image of twilight in `As Sunlight Falls 2`.

`Vista de Toledo` or view of Toledo is a gently shared track with some breathy vocals almost whispered over a strummed classical guitar relating a tale of meeting a secret admirer in the ancient hill city of Toledo in Spain. We have a kind of misty eyed instrumental in `Guano Junction 2` which seems to gather a little pace as it evolves. A sort of otherworldly offering comprised of dreamlike flute tinges and percussive instrumentation.

`Wednesday Afternoon` is a quite funky piece which seems to drift off midway through before continuing and concludes with some delightful brass and flute tones. I have to admit that i couldn`t decipher what the lyrics were about. We seemed to drift into `Shave!` which is almost a mix match of soundbites assembled together.

`Winter Hill` is a thoughtful, pensive, and meditative musing on a love the narrator had for somebody who seems to have passed on. It`s expressed over an almost desolate piano timbre which amplifies the pain felt. We have a further emotive piece with `Dark Skies` which has snippets of cracking thunder, rain, organ tinges and a guitar solo along with some vocal sighs which all add to its intensity.

The album closes out with `Pip, Squeak and Wilfred 2` which was pretty similar to the track similarly named shared earlier but maybe with a more prominent string arrangement.

In closing Andrew had this to say about the album, “Beyond the general concepts of love and loss, each listener is likely to project their own meaning onto the music. Besides, each song concerns itself with a different subject.” Mark adds, “I’d like to thank listeners for their time and attention and I hope our music rewards repeated listening and finds a place in their hearts.”

I must confess that I found `Guano Junction` to be an overwhelming listen and I’d imagine that similar to a classical musical score, it needs some time to seep in or be absorbed.  There`s so much to take in and it`ll be a release that I know I’ll return to repeatedly.