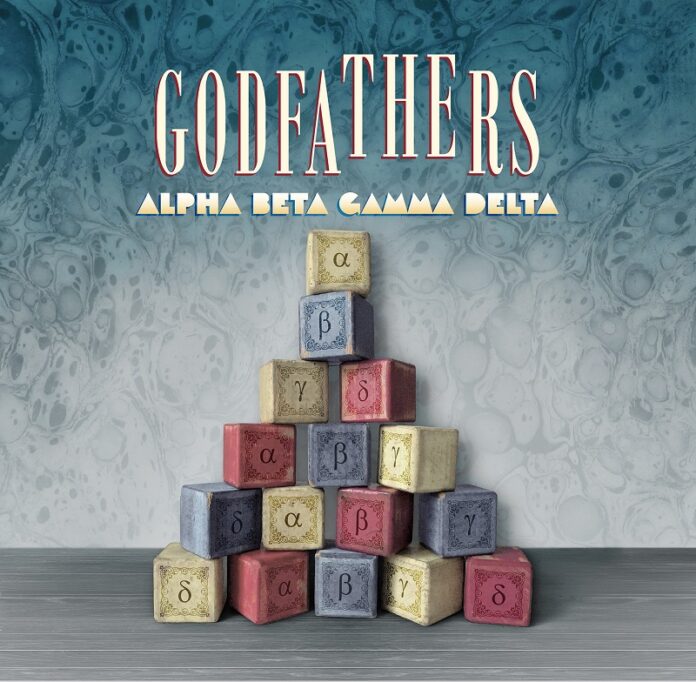 On one hand, you could say that was just the line before the latest brilliant guitar solo to pepper “Alpha Beta Gamma Delta” (which it is, it comes on the superb “I’m Not Your Slave”, with more “whoop’s” then The Dandy Warhol’s “Bohemian Like You”). But on the other, well….on the other you could look at it as a comment on the world.

We live in a world where choosing to heat your home or feed your kids is a choice people have to make, where we are cruel to each other, and where literally the very day I am writing this, middle England has got its knickers in a twist because a married couple they don’t like very much held hands – that one was black seemed to be the crux of it.

It feels very much that “…..Delta” is a product of the times. It’s a very 2022 record, for sure. There’s the post-covid euphoria of “Bring On The Sunshine” and it could – in honesty – only be a Godfathers record. Peter Coyne’s delivery is unlike anyone else’s and the new look band, with guitarists Richie Simpson and Wayne Vermaak right at the helm (in many ways it is their record) makes a glorious noise (I’d call it Big, Bad And Beautiful but that’s too on the nose.)

If the opening tune recalls Brian Wilson in its words, then “You Gotta Wait” is for all of us who want to commit murder in the week just to get to Saturday. That’s all of us then, right? This album’s centrepoint, though (along with the aforementioned “…..Slave” is the strutting punk of “Hate The 21st Century”. It’s almost impossible, surely, not to feel the same.

This is strange album, typical of the band, I suppose, that on the one hand it’s got a bleak world view, on the other, it needs to come together and collaborate: “love forever, come together” sings Coyne here and that sort of sums it up.

“OCD” brings the energy, the sneer, and the down and dirty rock n roll, as it deals with mental health issues in what, you can only imagine, is a personal way.

That semi-spoken word delivery is all over this. There’s a touch of New Model Army about the mid-paced “Midnight Rider” which appears to discuss with the plight of a refugee as they look for acceptance, it’s a powerful song and a fine example of the class of this collection.

Those of us that still think of albums in terms of “sides”, will agree that “Straight Down The Line” and its post punk message of rejection for the mainstream ushers in side 2, and its typical of this guitar based album that the solos just appear from nowhere. It’s quite striking how many times this happens.

“Lay That Money Down” would have a gold disc on the wall of The Libertines bog, if they had this talent and “Tonight” has a sort of effortless way of doing spiky rock n roll, and somehow making it catchy in a way you can’t quite work out how they did it – indeed, even when the acoustics come out on “There’s No Time” there’s something just a little naturally off kilter about it. The lyrics are beautifully twisted poetry, too, as if they hide some real pain.

“Dead In Los Angeles” and its angular sounds, seem to abandon any hope, and “I Despair” is a bitter, spitting attack on world leaders. It does come with a riff that Billy Duffy would be proud of, mind you and is oddly uplifting, as if it says “it might be us against them, but we’ve got ….us.”

Indeed its tempting to think of this as something of a concept record, like we all came out of the pandemic with renewed hope and a year later, we’re ready to retreat indoors again.

That’s an opinion, but what I am even more certain of is that “Alpha Beta Gamma Delta” is a marvellous record from a band who continue to innovate and evolve. And that is not as easy as A, B,C or else everyone would do it.