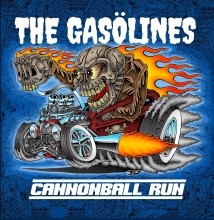 Any racer will tell you the importance of a good start. The Gaslines know this: “Autobahn Outlaws”, the song that kicks off this shindig certainly does. These boys haven’t come out of Sarpsborg, Norway, to mess about.

Nope, rather, they are racing into hell with their pubes on fire (as a band so memorably put it on stage once, and I’ve been waiting about 10 years to get it into a review). You can tell that from the get-go in fairness. “…Outlaws” starts with a solo like Adrian Gasoline is being shot out of a cannon and gets faster from there.

“Go! Go! Go!” does, does, does and pretty much everything here likes the idea so much it does it again and again (and again) since we’re talking in threes.

See, this isn’t just about the words, this isn’t just about the music. This is about an attitude. That is to say that Sindre Gasöline (and what foresight from Mr and Mrs Gasöline to raise all these bands members) delivers these songs as if he really, really wants to fight you.  There’s a bit in the chorus of “Booze, Gambling And Hotrods” that suggests: “the reason that I gamble is because I always win” and he almost dares you to prove him wrong.

The band is a vehicle (puns intended) for Morten Gasöline (who when he was just plain old Morten Nilsen was in MV faves Pain City) to do….well what exactly? He puts it thus: “Creativity can be like constipation and diarrhea. The original plan was to just replace the strings, but I ended up with a full album for a new concept.” So it is, then that “Chicken Race With The Devil” (and the award for the best title of 2021 goes too…..) beats you, “Speed Freaks” pummels you, and “Demolition Derby” finishes the job by running you over while the band throw beer cans at you as they speed off down the fast lane. Oh and the drums here? That’s our boy Adrian too. He’s the king of this garage.

“Fireball Garage” slows it down a touch, just a little touch anyway, to kind of Peter Pan Speedrock territory, it would be ace to think that this really was where they recorded their stuff, and “Queen Of Hearts” is like the filthiest boogie you ever heard.

The last one, the glorious “Whiskey Blues” even starts with acoustic guitars (!) and a blues riff, but fear not boys and girls, that’s only so the riff can hit, and hit hard as hell.

This isn’t for everyone, and its arguable that you might want to get out of dodge if The Gasölines moved in next door, but basically, if Motorhead had just committed a bank robbery the getaway driver has this on as the soundtrack to add to the thrill. If that sounds like your bag, then brothers, sisters and everything else in between you have found your new favourite band.