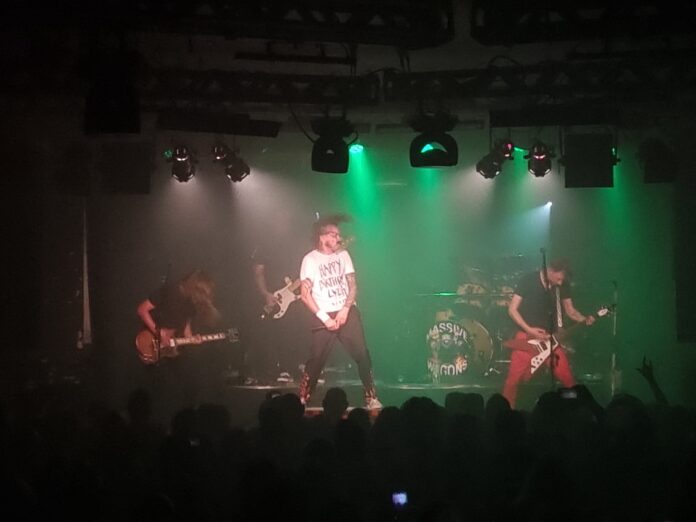 Chris Catalyst might well be the biggest star you’ve never heard of. He’s the kind of thing that if you know him you love him, but even when he asks “who’s seen us before?” here its only half and half. But he’s been in Ginger Wildheart’s band, he’s played in Sisters of Mercy, Terrorvision, and many, many more, and that includes his band, The Eureka Machines. One of them, Pete, is standing next to him tonight. Earlier in the year, he released a record, “Kaleidoscopes” and plenty of the set tonight is from it. “Make Great Art”,  the weirdly brilliant opener, the power pop thrill of “The King Of Everything” and “I’m Not Okay” which is really, the perfect song for the pandemic era are all relatively new, but he’s always had this type of ability. “Yeah (Oh No)” and “Wake Me Up On Monday” (during which the horns are raised – “because we are in the home of heavy metal”) are from the previous solo record and there’s a cover of “Boys Keep Swinging” from David Bowie to finish things off, and it suits them. Catalyst should be a huge star, but maybe – given that he was one of the first to do the lockdown shows to connect with people – he’s just happy to be out of the house. Whatever, he was superb here, and he even invited us back to his for a drink (“I won’t be there, and try and keep the noise down for Shirley, next door”). You can’t say fairer than that, can you?!

Cliché, yes, but when AC/DC’s “For Those About To Rock” starts up, you kind of hope the gig will live up to it. When Massive Wagons play, you know that “being rocked” is essentially a guarantee.

Look, its entirely possible Lancaster’s finest have played a bad gig, but I am also prepared to bet you that it wasn’t their fault.

It’s interesting to watch them grow (they are in the middle sized room here tonight) and any thoughts you might have had that a band that spent their lives on the road before 2019 would struggle upon return are allayed by the first 15 seconds of “In It Together”.  Right, lets go, rock is back.

MW are basically your boys. I genuinely believed that they were representing the underdogs when they opened for Skynyrd and ran around on the arena stages, and my how they deserved it. “China Plates” excoriates the Facebook generation, “Bangin’ On Your Stereo” is turned into a medley with “I Fought The Law”, “Surrender” and more, and there’s a feeling that they are just fans, albeit with brilliant talent.

As with a lot of acts, though they are dusting off old stuff (perhaps after listening to them in lockdown) and Wagons are trucking back out with “The Day We Fell”. They do have a big choice of tunes these days and many of them are classics. Like “Ratio”, that’s a belter, “Fee Fi Fo Fum” (introduced with the customary line: “I smell the blood of an English rock n roll band” from Baz Mills).

And we must talk about Baz, considering that he’s a “proper” frontman, one of the best too. Part ringmaster, part singer. And part loon, witness the fact he can get 500 odd Brummies chanting: “you say Rogan, I say Josh” in “The Curry Song”.

That’s one of the encore’s, the other is “Back To The Stack” which doesn’t hide the fact that it loves Quo even before the “you can raise your glass to Rick, cos I am raising mine” line, and it’s hard to watch, Adam Thistlethwaite, Steven Holt and Adam ‘Bowz’ Bouskill synchronise their dancing without a smile.

In many ways, that sums the band up, though. What they are doing isn’t groundbreaking, but they are genuinely brilliant at it. They work hard, they have fun, they are playing the music they love and bringing joy. We need more bands like Massive Wagons. We salute you. There must be a chorus in that, somewhere.