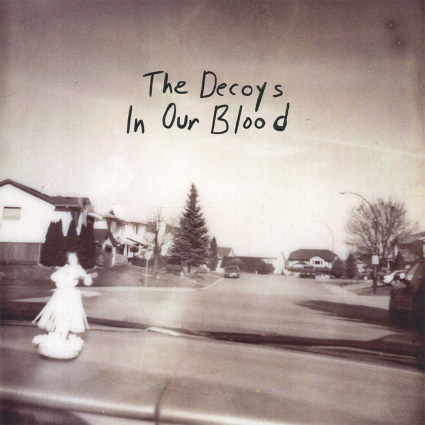 First, a history lesson. And it goes like this: The Decoys originally formed as a band to support guitarist and vocalist Matt Stanley’s solo EP “The Life & Times” in 2008. The key point, as far as we are concerned is this. These days, on album number two, they are a self-styled Power Trio, comprised of Matt Stanley on guitar/vocals, Sean Poissant on drums and Sean Schneider on bass.

Their first album for five years comes storming out of the blocks like Usain Bolt when he’s gone stir crazy, with the brilliant “Don’t Hesitate” and everything about its soaraway chorus and screeching solo screams, “this being in a band lark, it’s great fun, isn’t it?”

Fans of bands like The Trews and artists like Will Hoge, will find much to enjoy, but this isn’t a copy of anything as the keyboard driven blues of “Not Right Now” manages to distill rock n roll into four minutes, and the bass groove of “Crossed The Line” is almost Replacements-esque in its desire to get somewhere – anywhere – as quick as it can.

But The Decoys, and this superb record, will not be pigeonholed. Genres are mere starting points for ideas, and it merrily flits between big ballads like “Ain’t Gonna Let You Down”, laid back bluesers like “Wasting Your Time” and the stripped back “Alibi” which would make Tom Petty proud.

There aren’t many records that can do this much in so little time, and the title track is yet another left turn. Americana that sounds as fresh as Whiskeytown, and there really isn’t anything that this particular triumvirate won’t try, it seems, as the acoustics of “The Lighthouse” prove.

Things conclude with the longest song on offer. The slow building “Don’t Hang Me Up” is a fitting conclusion to what is an incredible collection – and wins many MVM bonus points for its organ solo. Thrills and spills await at every turn and it keeps revealing more of itself with each spin.

As the band are using its release as an excuse to get out on tour to new parts of Canada for the first time, it’s hard to say how far it can take them. Far better just to revel in its glory, because “In Our Blood” really is a gem.