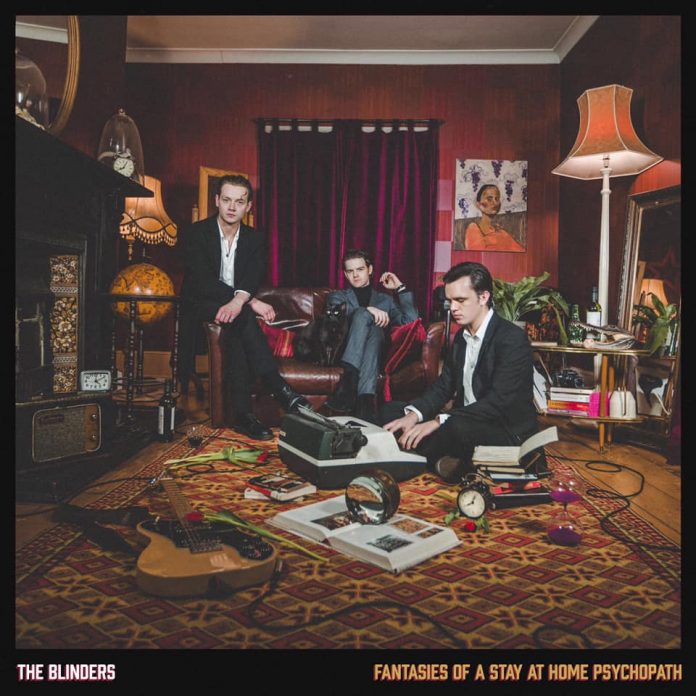 It’s rare you come across an album like this one.

I can’t imagine there being much middle ground with this, in honesty. People are either going to love “The Fantasies Of A Stay At Home Psychopath” or they are going to hate it. And I imagine that’s exactly the vibe The Blinders were going for.

The basic facts are these: It is the second album from the Doncaster mob, and at various points it is a nightmarish world which basically sounds like Nick Cave is being backed by The Libertines (with added Bugs Bunny, naturally). Confused? You will be, probably.

But goodness me, if you enter into the spirit, you won’t want to leave.

The opener “Something Wicked This Way Comes” has a raw, almost Jim Jones Revue thing going on. The sort of song that would feature on Peaky Blinders on one of the more violent bits when Tommy Shelby shoots some other mob to smithereens (I’ll be honest here, so convinced was I that it actually was from the show that I spent rather too long searching the internet).

The three piece might be from Yorkshire, but they are now based in Manchester – signed to the cool Modern Sky label – and there’s something of the Manc scrappy punk sound about “Forty Days And Forty Nights”, and its also worth saying too that however dark it is, however nihilistic, its also wonderfully catchy and I imagine they would be magnificent live too, in fairness.

“Lunatic (With A Loaded Gun)” is probably about Trump, but the line “he gives his flag a hug and says what he must, to gain their trust” is applicable to whichever right wing, populist piece of racist filth you choose it to be, I guess (hi, Yaxley-Lennon, you bastard).

The glorious nature of this, though, is that they follow that harsh excoriation of the modern world, with the more gentle, timeless harmonies of “Circle Song” (key line: “if not for Bowie, who’d have heard of the Norfolk Broads?”) ,the downright weird “Circle Song” – the one with the Bugs Bunny reference, they are mates apparently – or a spoken word piece called “Interlude”.

This is an ambitious and brave record. “Mule Track” is “modern punk” like IDLES, but its cleverer than that, the lyrics more poetic, the melodies more nuanced. “Rage At The Dying Of Light” with its thunderous bass and trippy vocals, is very much the sound of a band that is looking to make a mark on its own terms.

“From Nothing To Abundance” is one of those songs that seems to lurk along in the shadows before launching an attack – and as a metaphor for the dapper band that’s not a bad one, because there is still the look of a gang about them. “Black Glass” is the longest, the most sprawling, and dare I say, the ambition it contains is indicative of a group that will only grow.

The last one “In This Decade” underlines that, actually. Acoustic, kind of summery in places, the use of language is positively Dylan-esque: “you could fuel a spirit lamp with her daydreams and it would burn all night through” is not your usual line. And this is not your usual band, either.

The last line on the album: “for in this decade, there’s no knowing, if there’s going to be a tomorrow.” If there is no light at the end of the tunnel, this might as well be playing as the world ends.

“Fantasies Of A Stay At Home Psychopath” is mad, dangerous and unhinged. I reiterate, you’ll love it or hate it, but you will have an opinion either way.