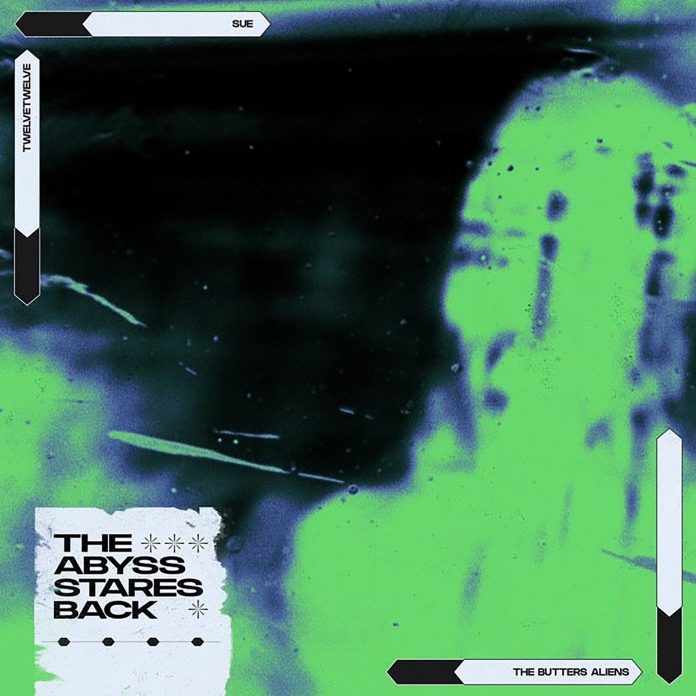 To be truthful what I know about horror can be written on a pinhead. I have only ever watched half of one “horror” film in my life. It wasn’t even a horror film. It was Lost Boys when I was about 12, and I got so scared I had to get my mate to turn it off. He still takes the piss to this day.

That is a genuinely true story.

And it is also why I was a little worried when this turned up. You see, like the press stuff that came with “The Abyss Stares Back” put it: [it brings] together three underground acts from Birmingham’s Punk scene; Twelve Twelve, SUE and The Butters Aliens. Each band was tasked with writing a song within the theme of Cosmic Horror, resulting in three unique interpretations that will have your feet stamping and your blood pulsing throughout.”

Now, forget all that above, and instead focus on three of the nastiest, most nihilistic, bleakest punk songs you will here – which essentially means everything in the world is as it should be.

The Butters Aliens are first up with some brilliant stuff. “Rat Trap” is full of energy too. Ed Draper sounds like he means it when he sneers: “we’re TBA and we’re fucking up the scene”. And there’s some real intent too, in the second verse: “My boss is a prick” he points out matter-of factly at one point, and the rough and ready sound here adds to the ambience in the most perfect way.

Twelve-Twelve take your nightmares and make it real on “Pills”: “Take about one more pill, maybe I’ll end it all” is a stark, raw embodiment of what is on offer here. And with the greatest respect to singer Alex Cristea, he sounds unhinged. There’s all kinds of punk, and this is from the unsettling end. Not one for kids parties, unless you are playing pass the parcel with The Manson Family, that’s for sure. “My universe is set against me,” they scream here, and it offers no light at the end of the tunnel.

With their offering “The Beast” Sue show they are the fastest one of the trio. The lead guitar of Elliot Stone is piercing and screeching, but this is the type of thunderous stuff that made Nirvana b-sides visceral affairs when I was buying them. Scant regard for melody, at least on the surface, but a little like Big Black, say, scratch away the layers and it’s here. And the sloganeering lyrics likewise find a way to meld themselves in.

So three bands, all with disparate sounds, but all with a sort of common thread. Never mind the loose concept of this, the thread here is originality and perhaps desire. These are not bands, you suspect who do this for any other reason than a need. Never mind wanting to make music, somehow it goes deeper. At nine minutes long, it is a short trip to the dark side, but it is a violent form of blunt force trauma all the same. Unpleasant, but all the better for it.