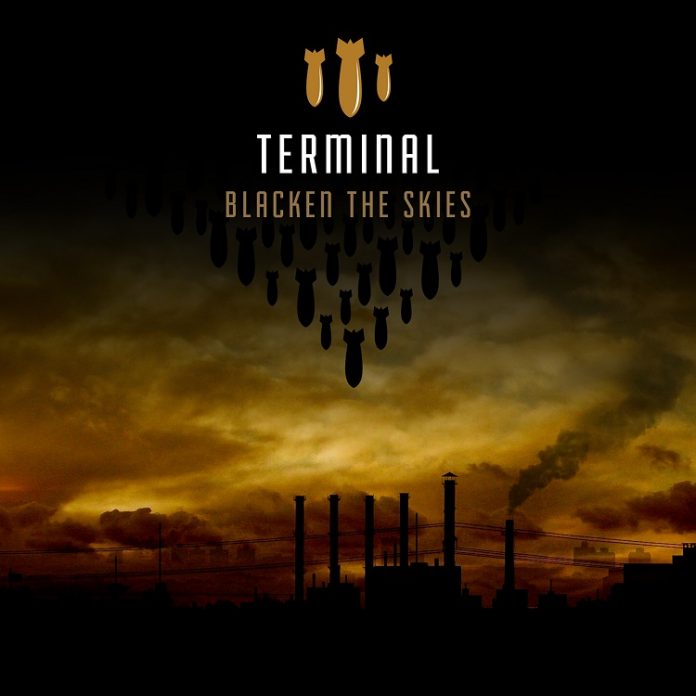 It’s funny how things work out.

I hadn’t listened, really, to much industrial music for years. But I reviewed an album last year by British political electro punks, Calling All Astronauts, and an EP earlier in the year by a Canadian fella called Joey Diabolic.

If I hadn’t – and if I hadn’t subsequently put a couple of my old Stabbing Westward records on my iPod to while away a lockdown afternoon in the office – then I might not have got to this album.

And that would have been a damn shame because “Blacken The Skies” is a hell of a record.

It is – in the studio – the work of one man – Thomas Mark Anthony – although live he adds a mate on guitar. It is said they put on a real show, and listening to the 35 minutes here, you can see why.

This is bleak and remorselessly relentless. It begins and ends with instrumentals – and there’s another one in the middle as a kind of palette cleanser – and its tempting to think of these as the chance for the titles to roll, because this is less an album than an experience.

It is heavy too. It is staggering, really how it can be so heavy an oppressive and how it can groove, as it does on “Terror Ride”, and for a fairly short record, it has a grandiose feel.

“Deadline” sounds like a 90s band that came along in the wake of “Fat OF The Land” but it’s a beatdown, that’s a fact. And the lyrics, too, fit the dystopian, barren musical landscape.

This is perhaps not too surprising, given Anthony’s history as a South African born, lifelong anti apartheid campaigner. That said, the most impressive thing here is the scope of what he does. “Fault Line” is almost goth. The kind of thing that Paradise Lost tried to do on “Host” – are the machines taking over? That’s the inference from the noise.

The metronomic, hypnotic “Crackdown”, which has a wonderfully, cold, clinical air, “Dance Fall Pray,” which has a guitar line not a million miles from The Mission and the likes,  are both mighty slabs of twisted genius, but the best, perhaps – is the genuinely malevolent “Needle Park (Time To Die)” which  sounds like the 80s, the age of greed is good, of no such thing as society, and even as it explodes into its chorus, has no warmth at all.

“Riot Shields” sounds like a rave (or at least what I’ve always imagined  a rave to be, I’ve never been to one) while there’s a mysticism about “Godfire” and if “TRMNL” sounds like the sound of some distant galaxy, then this record had lift of long before.

The most striking thing about “Blacken The Skies” is it offers no apologies, takes no prisoners and makes no concessions to you – or anyone else. It exists on its own terms, it doesn’t bother to answer your questions, nor indulge in anything approaching a nicety.

It is not easy listening, it is not supposed to be. It’s dark, twisted and nasty – and so far as I can tell, that makes it the perfect soundtrack to 2021.