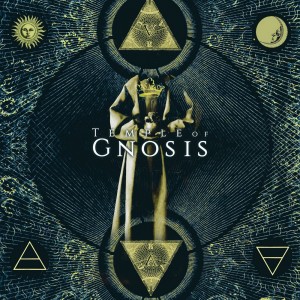 The leader, and possibly only member,  of the Temple goes under the pseudonym H.M.T and for a concise understanding of the concept of the album it is probably best expressed through the creator’s own words:

“The concept is inspired by the Western esoteric tradition, especially the alchemical process of Enlightenment and within that, the first stage of the alchemical work called “deconstruction.” Philosophically, this is the first process of transformation of mind and spirit, and it consists of catharsis (discharge and purification) and the destruction of the original structure in order for the new one to be built upon its ashes.

In alchemical tradition, this is the first, most essential and necessary step that leads to the transmutation of the spirit. Using the old alchemical acronym “V.I.T.R.I.O.L.U.M.” will be best to describe the importance of this process; “Visita Interiora Terrae Rectificando Invenies Occultum Lapidem Veram Medicinam” or translated “visit the interior of the earth, and by rectifying you will find the hidden stone which is the true medicine”.

This is to say that there is no enlightenment without traveling through the darkness and the depth of your mind and spirit; deep in our subconscious is where the wisdom is and the singularity of our spirit waiting to be released and developed; light and darkness are not essentially different phenomena, they go together and act as a single dimension of which they are only the poles”.

If you followed that then the aural interpretations of H.M.T’s words will make perfect sense to you.  If not then you could always make up your own.  The theme and rhythms are kept consistent throughout the four tracks and the variations are subtle rather than obvious on the first listen.  At times the music is ambient and at other times industrial.  The riffs are solid, if standard, and they lead your way through the 30 minutes of unrelenting desolation.

As anticipated the vocals range from harsh to unforgiving.  If indeed they could be classed as vocals as for the majority of the EP you could swear that the devil himself had taken a sudden career change and decided to front the band.

As always with albums or EP’s of this nature it’s not really possible to isolate key tracks as the EP is to be taken as a whole and you may not gain much benefit from listening to the tracks in isolation.  That said the final track “Thoth-Mercvrivs” stands out with it’s end-of-the-world aura.

Where to find out more about Temple of Gnosis: