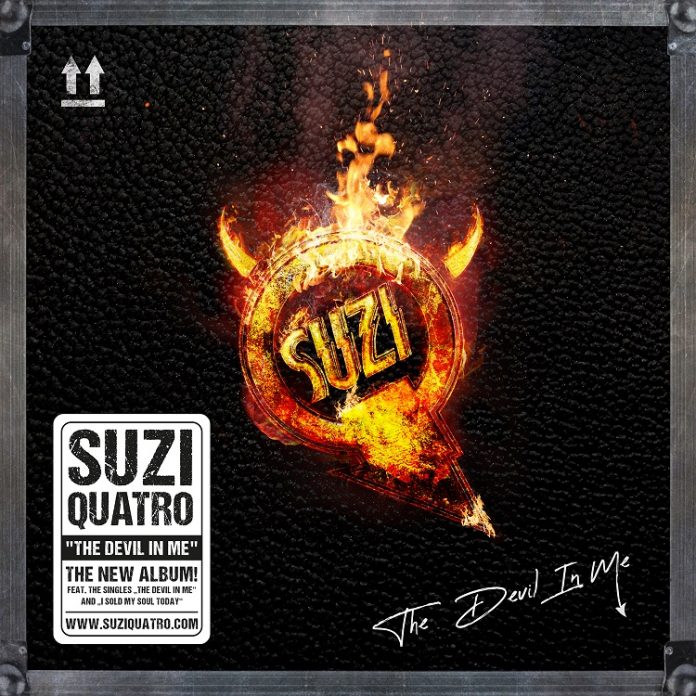 Suzi Quatro – if Wikipedia is right – was born on 3rd June 1950, and her motto apparently is this: “I won’t retire before I turn around, shake my ass and there’s silence.”

Your humble scribe was born on the 1st October 1975 and Ms Quatro has, this very morning, caused me to question my own aging process. See, I don’t usually get the proper CD with review copies, but I did with “The Devil In Me”. It was a real treat to read the lyrics, like the old days. Except….

Well – and I could blame the typeface – for the first time since I started wearing glasses when I was 12, I couldn’t read the things until I took them off. So never mind shaking your ass, I am now short sighted, so cheers.

And, aging, in a manner of speaking is the matter at hand. Suzi in those notes reckons this is her best record since her debut in 73, and if that sounds like something people say almost as a cliché, here, “….Me” is so fresh, its hard to disagree with her.

The title track literally screeches into view, with a proper dirty rock n roll riff. Quatro’s son, Richard Tuckey, plays all the guitars and co-writes the album (as he did with 2019’s “No Control”) this is a step up, though, as SQ notes herself: “This is the album Richard always wanted”.

It’s a lockdown album. Metaphorically as well as factually. She and Richard were due to tour with separate projects last year. When the world went to hell, they set to work. Broadly speaking too, “Devil In Me” is reflective of that. In that “Hey Queenie” has a real blues feel (not the last time I’ll say that either) but one with a sense of fun – the cowbell and the organ do that – but elsewhere, the vibe is very different. Reflecting, perhaps, the moodswings of that early lockdown.

“Betty Who” isn’t that, though. Cherrie Currie adds her vocals to that one and its perfect power pop as a result, then the chugging “You Can’t Dream It” is simply shot through with a class that comes with a lifetime in rock music.

Then comes the changes in pace. She herself says it’s a “concept album” and if that’s the case then the soul of “Heart And Soul”, which conveys a real emotion is definitely written on a bad day, while “Get Outta Jail” expresses an anger: “I got these lockdown blues” she rages. Before we hit the crux: “give me one more gig before I die”.

“Do Ya Dance” recovers its sense of fun: “let me finish first” she offers – we’ll leave that there – and there’s something raw and even a little primal about them.

“Isolation Blues” is a different beast. The sort of thing you can imagine playing in a jazz club at last call, as the staff try and clear up as the singer orders one more round. It’s almost as if from these dark moments come revelations, though, as “I Sold My Soul” finds a hard rock – almost Deep Purple – element that you just weren’t expecting.

“Love’s Gone Bad”, replete with some mighty saxophone is another of the down moments, but its so well done, and if “In The Dark” largely follows on in the same vein, then “Motor City Riders” not only ensures that the record ends with a real high note, but also arguably, its finest moment.

One which proves two things. First, you can take the girl out of Detroit, but not Detroit out of the girl, but also why this album is so important to her: That line, “one more gig before I die”. That one. Look its not just Satan that’s in “Devil In Me” it’s a lifetime of music – and that wins the battle of good and evil here.

Previous article
BAND OF THE DAY: BROTHER AGAINST BROTHER
Next article
RECOVERING THE SATELLITE’S