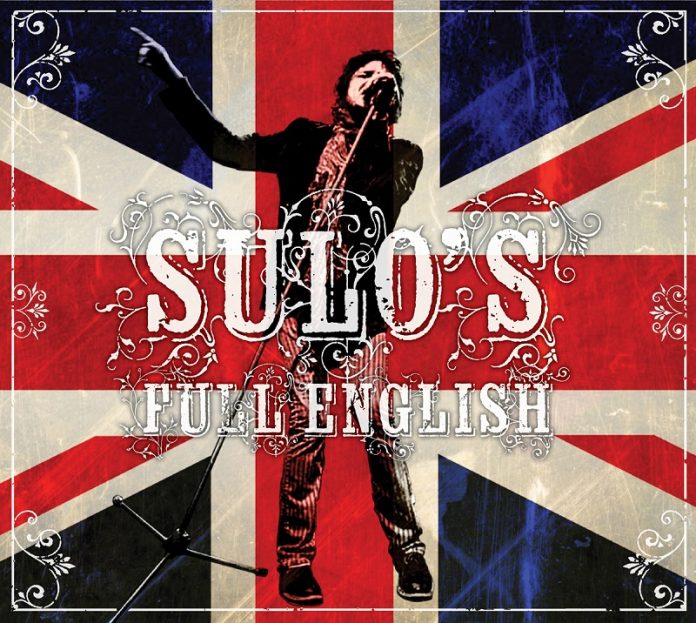 Sulo makes the album he was born to

Last year Sören “Sulo” Karlsson released a book. As part of that he recorded seven songs. These are tagged on to the end of “Full English” and one of them – “Hot Swagger In The Big Smoke” – sees Sulo team up with Billy Bremner (Rockpile, Nick Lowe) and although it isn’t on the album proper, it captures the zeitgeist of the 12 songs that do make up his latest album perfectly.

“In this rainy, windy country, the star’s still shining bright,” offers its chorus and if the cover (the Union Jack rather than the St George’s Cross notwithstanding) and the album title don’t give it away then that line might. On “Full English” we are asked to imagine that it is “swinging London in 1973” and with that premise in mind – and a cast that includes Chris Spedding, Jamie Moses, Chris Parks, Melvin Duffy and more – transport yourself back to some bygone age.

Of course, it must be said that this is not a great departure for Sulo. He fronted a band named after a Bowie album released in 74 for goodness sake, and most of his output has the feel of a record from 1973, its just here he has made it a little more overt.

The album finds him in a more laid-back mood than normal too. Most of it sounds like Mott The Hoople and The Faces jamming some country tunes with The Stones over a beer or two and that’s certainly the case with the opener “Lady Jane” which adds some Michael Monroe style Saxophone to the mix.

“Drizzly and windy” the UK might be – and that certainly described today accurately – but “Something About That Girl” is sun-drenched and the strutting “Sorry For The Young” (which features Guy Bailey ex- of the Quireboys) with its feel of The Sweet, is turned into a veritable jamboree by the gleeful slide guitar and liberal use of horns.

“Among The Angels” explores the gentler side of the record, with its lap steel giving a real country flavour, but this Jekyll and Hyde collection is equally adept at full on rock n roll. “Run For Your Life” has a wonderful lead guitar tone and its line: “In a world of mediocrity there ain’t a place for you and me” feels like it might be important to the artist here.

“Hit Me With Your Rock N Roll” sounds exactly like you’d expect a Sulo song with that title to sound: “I want a bit of that old school sensation” is its first line and forget the 70’s this is rock n roll in its purest early form.

“Lightning Strikes” is back to the acoustics. Bluesy and fragile, it is a tremendous piece of songwriting, but in typical style, this is followed by the outright honky tonk of “Stand On The Rock.” As if to exemplify that this is a record that wanted to cover all the bases, “Is It Love On Your Mind?” could have come off the deep cuts on Springsteen’s The River opus.

“Finest Words” comes from the standpoint that The Faces “Ooh La-La” is the best song ever and builds from there, while anyone who hasn’t heard Sulo’s work in power pop band The Crunch, should listen to “Life’s Work” to see how good it is.

The record proper finishes with “My Bounty From Above” an absolutely authentic old-school affair, one which proves that the singer was born under a wandering star.

The bonus tracks are fun, particularly Wilko Johnson’s cameo on “Roxette” and The Quireboys “Roses And Rings” which sees Spike be raspy even for him.

The 1970’s has always appeared to MV to have been the best time for music, and it is a deep sense of regret to us that we were born right in the middle of that decade and are therefore too young to have seen all our favourite bands first hand – or at the very least in their prime. For all those that opine that “they don’t write ‘em like that anymore” along comes full English. But it has more than nostalgia on its menu. It is Sulo at his most content.