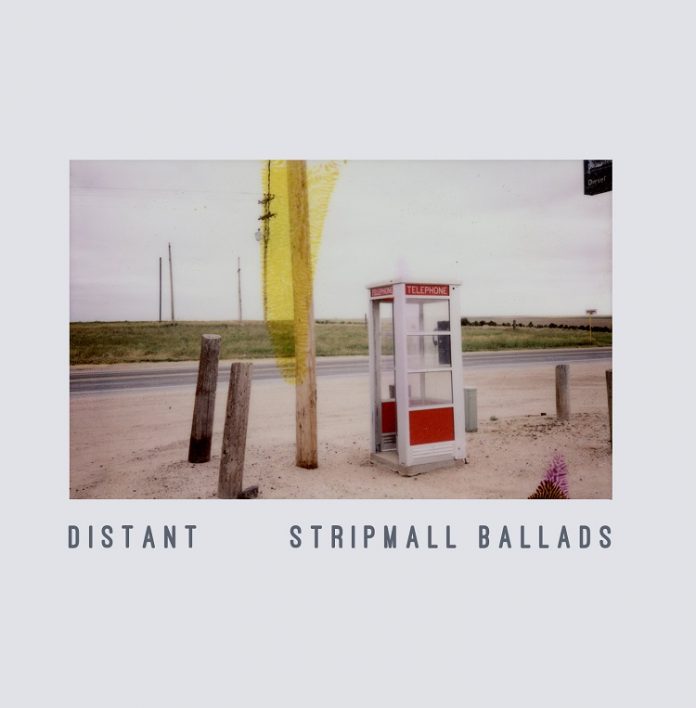 “Men with beards”, observed my late mother, “always have something to hide”. I’ve got one. Not sure what that says about me.

But in a similar realm, I am always kind of drawn to the mysterious nature of the solo artist who hides behind a band name.  It always seems to me to lead to interesting music.

Phillips Saylor Wisor is Stripmall Ballads (and he’s got a beard too, so maybe he has more than a double life, if mum was right?) and he’s a man steeped in his craft.

He founded the old time band The Shiftless Rounders, and the eight songs here do owe a little to that – what I mean by that is there is a “traditional” singer/songwriter here, the sort you’d find me watching at the Folk Club near where I live on a Tuesday night, with a story in his heart and a weatherbeaten guitar case at his feet – but they are from a different place entirely.

Being English, I wasn’t sure what a Strip Mall was to be honest (it was less adult than I expected). Google explained: “[it] is a type of open-air shopping centre common in North America where the stores are arranged in a row, with a sidewalk in front. Strip malls are typically developed as a unit and have large parking lots in front.”

The reason for putting that in is simple. Wherever you are in the world, you’ve seen them. On TV, in films and they conjure up thoughts of middle America, small town dreams, the sort of place where, as Springsteen put it: “they bring you up to do just like your daddy done.” If I might be so bold I could add that “Distant” is what happens when you put some miles down between you and those ideas.

These eight songs travel done some odd roads, and meet some odd characters. It tells the tales, it says, of an occasion when Wisor was travelling the heartlands and a lady called Susan stopped at the crossroads where he was playing.

Whether that’s true or some Seasick Steve-ish type of tall tale makes no real difference, frankly, because it frames the record. The opening song “Susan At The Crossroads” is fragile, claustrophobic even: “I don’t care about your hustle” he sings in what we over here would term a “southern drawl”,  and the sparse – but fantastic – instrumentation (the drums of Darren Woods are particularly important here) not only adds to the song in a stark way, but it brings to mind the album that Calexico did with Iron And Wine last year.

The whole feel of the record is off-beat, but not in a horribly “quirky” way that sees everything sound false and forced. A case in point is “Juice And Sage”, which begins: “My soap smells of juice and sage” and has a real old time feel. It doesn’t sound like a track that was released in 2020, that’s for damn sure.

There’s a darkness here. A foreboding. There’s no other way to put it. “Don’t Mind Me” lurks almost, behind its upright bass from Evan Harris. It’s a real highlight, full of shadows and room for interpretation, the guitar solo here alone sets this apart from anyone else.

Touches of Neil Young and maybe even a pinch of Nick Cave aren’t what I expected when I heard this, although both are here. “Valerie” sees his register get higher and it’s more the singer/songwriter, late night troubadour stuff I envisioned.

“Pull Over Johnny” even manages to do some proper “southern rock” if you want an easy hook – at least ostensibly. Peel away a layer or two, though and what you find is a little like peeling the skin off an orange and finding something crawling inside. It all depends whether you are brave enough to take a bite, I guess.

“Marietta” has some evocative and vivid imagery in its lyrics, but again it seems ominous. “There’s something going on, on the banks of the river” he mumbles a little, here and I am not sure I want to find out what.

Even on a record where it frequently appears that anything could happen, “Jennifer Pine Tree” a seven minute, rather psychedelic freak out is an odd turn. Oddly discordant strings, and what sounds like brass of some kind (although none is listed on the credits that I can see).

“Slinger” is more like the overall feel of the album, it is written my Morris Paul Lippens (who according to google is the leader of a band called Paul’s Big Radio. But here, the words: then it all went down / a man died that night / it was self-defense / but that don’t make it right” are absolutely in keeping with “Distant” as a whole.

And, “Distant” as a whole, is a strange affair. Excellently played and with enough originality to deserve writing about, but equally it would be wrong to say that it is going to appeal to everyone. Which may well be the point.

One of the most strikingly different Americana tinged records you will hear. It nearly appears to float by rather pleasantly, but if you give it a proper chance it opens up a very strange set of songs. Men with beards you see, they are always in disguise.

Previous article
ARTIST OF THE DAY: ROBERT FRANCIS
Next article
REVIEW: THE SUICIDE NOTES – THE PLEASURES OF DESPAIR (ELECTRIC) (2020)