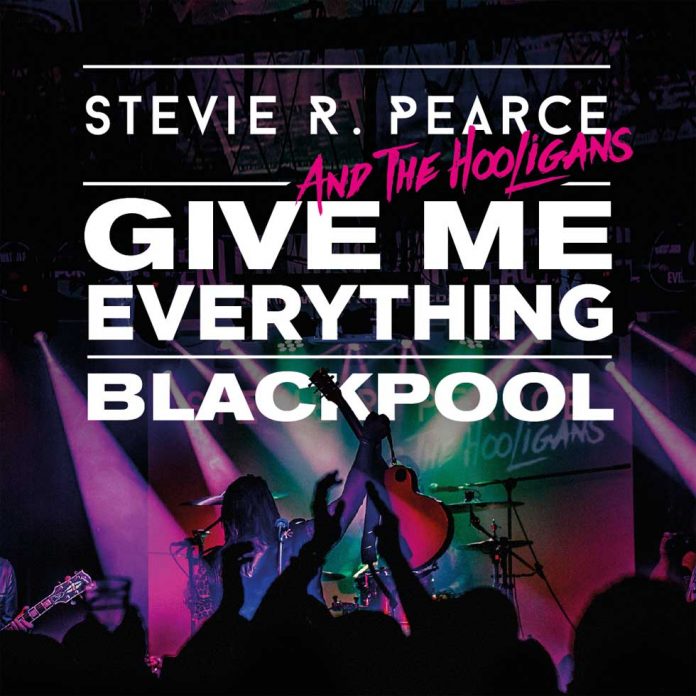 “Give Me Everything” takes its name from something Stevie R Pearce says as he and his Hooligans play “Set My Soul On Fire” towards the end of this.

Never mind that its sound is a near perfect thing for anyone who wishes Honeycrack were still making music, those words, to the crowd to get them to sing it, seem to tell you all you need to know about Pearce.

One of those blokes who makes music – it seems to me anyway – because he needs to, rather than has to, Pearce is a busy boy.

In the Love/Hate, Warrior Soul, and a founder member of the awesome Black Bullets, the Hampshire man also does the solo thing.

In spring of last year he stuck an album out, a mighty slice of glam rock it was too.

This is the set he played last Christmas in Blackpool, while on a bill that also included MV faves Senton Bombs (a hometown gig for them, I think?) and the mighty Massive Wagons.

On this evidence, if you were there, it sounded like a great night.

From the second the punky take on “Folsom Prison” starts, to the last note of the sleaze-tastic “Hooligan” (and I make no apologies for saying again that the fact he rhymes that with “won’t get fooled again” is genius) this sounds exactly like you’d want a Stevie R. Pearce live record to sound.

He says, with admirable self-deprecation, that “I am not known for writing the hardest songs in the world, even the people of Blackpool can sing this at quarter to nine….” In “Bad Day”, except he knows, surely, the gloriousness of the simplicity. A fatalistic thing (“my girl is with a guy that earns more in a day than I will in my life, and that’s more than a shame”) but celebratory at the same time. A leopard skin clad knuckle duster if you like.

“Going Down” sounds like its got a hint of danger about it, like it wants a scrap in the car park after, while if “You” borrows a first line from GnR’s “Coma” then the thought remains clear: as much as I love Axl and the lads (and I’ll be forking out for one of them stadium gigs) then this sounds more alive somehow.

There’s a more metal edge to the riffing of “Nobody Loves You”, as it deconstructs the modern world in three minutes and there’s something a bit filthy about the blues licks of “Same Old Story.”

It’s like this, I guess. The studio album was great and all – it really was – but these live versions seem, if not better, then more natural, let’s say. Stevie R. Pearce belongs on stage, and on this live album everything suggests that to be the case.