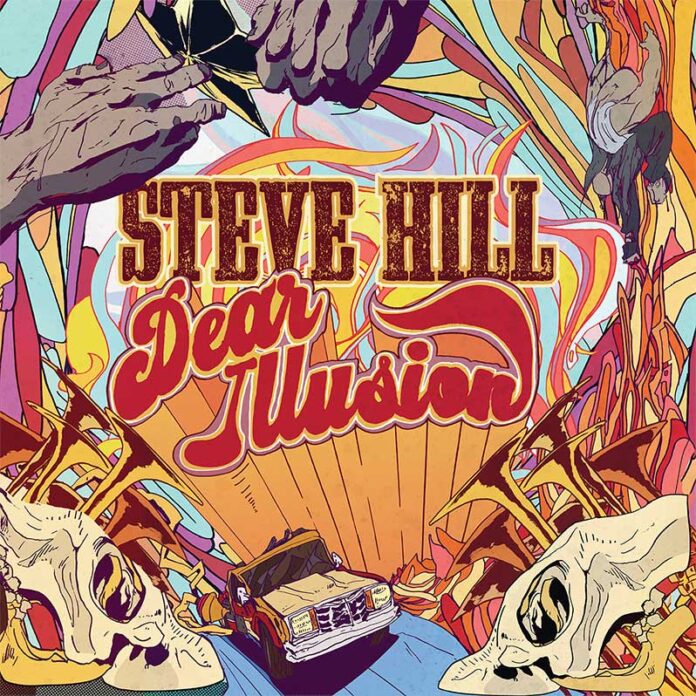 I’ve been a Steve Hill fan for years, but I’ve only seen him once. Back in the spring of 2018 the Ontario native opened for King King. Upon watching his show I wrote on these pages: “Steve Hill is better than good. He’s something more like a force of nature. Resistance at this point is futile. In a year everyone will claim they were on board all along, so you might as well be now.”

Which would have been fine but the pandemic rather stalled things, but we’re back on track now with “Dear Illusion”, but – and I hope you were paying attention – there’s a couple of things related to that intro that I need to catch you up on. First what Hill describes as “a version” of the record was completed in February 2020. Yep. So he didn’t release it, instead changed it.

Second. Back in 2018 he was a one man band. He had been for ten years, but this, isn’t. Indeed, the couple of changes are so fundamental that you have to mention them from the get-go. There’s two horn sections all over this. Giving it a kind of Southside Johnny or classic E St Band vibe. Like it’s the most fun soul revue you could imagine. Then there’s the drummer. Back when he opened for King King their drummer was Wayne Proctor. He’s drummed for everyone. He’s brilliant. And now he’s here, thumping tubs for Steve Hill on most of these.

All of which gives this a different vibe than the last few albums, but as the old cliché goes, the more things change, the more they stay the same, and if you loved Hill before, you’re still going to dig this, and so much fun is the horn section that assuming you’ve got a pulse it’ll make you feel more alive.

“All About The Love” – the opener here  – is a perfect window into the new (ish) world. Written and played as a solo artist, the horns were added and my goodness, as a kick off this is like scoring a screamer after 15 seconds. Primal, but total fun. It’s all you need to know about Steve Hill in general and “Dear Illusion” in particular.

Just for good measure, the single “Keep It Together” does the same thing, but adds a harmonica lick for even more trouble to occur. “Just wake me when it’s over” sings Hill here. He doesn’t mean it. He’s fooling no one. He’ll be there when the sun comes up.

“Everything You Got” struts. Man, “Hold on, I’m Coming” ain’t got nothin’ on this. The title track, mind you, changes the feel. The head to the tail of the one previously, if you will. “how could I be so bold as to try and hold an illusion?” goes the hook and it feels like if the rest has been the party, this is the hangover.

Whoever the girl is these songs are about (Hill writes most of them with his writing partner, Johnny Pilgrim) has done a job on them, I’ll say that. “Steal The Light From You (Bigger Star)” sees her leave for another bloke. It’s met with a shrug and a tune that Credence would love. It’s a song he reckons he’s had knocking around for ages, but this version nails it, for sure.

Everything here, whether lyrically happy or sad, sounds as cheery as can be, “Don’t Let The Truth Get In The Way (Of A Good Story)” is a case in point. The hook here is so bouncy that you almost don’t realise he’s raging about social media – and the middle breakdown is proper hard rock. At odds with the summery blues of “Follow Your Heart”.

“So It Goes” is something of an outlier. Whether its true or not, only Hill knows, but it’s a beautifully poignant acoustic ballad, that you have to believe comes from the heart. “She Gives Lessons In The Blues” seems to be true too. There was a song called “Emily” on one of the other albums I’ve reviewed of Hill’s. This one concerns her too. She might be “Mary” from the Springsteen albums. A catch-all for all women? If she’s not, she sounds like a right bitch, frankly.

It’s fitting that this album ends on another tangent. “Until The Next Time” seems to come in on widescreen, a soundscape that he’s not normally on, but it’s a beauty. Filled with pathos and regret, but hope. Always hope.

And “hope” seems to be the key word here. The world cannot be as bad as my Twitter timeline makes it seem, not when records as good as “Dear Illusion” exist. A departure, but a brilliant one.