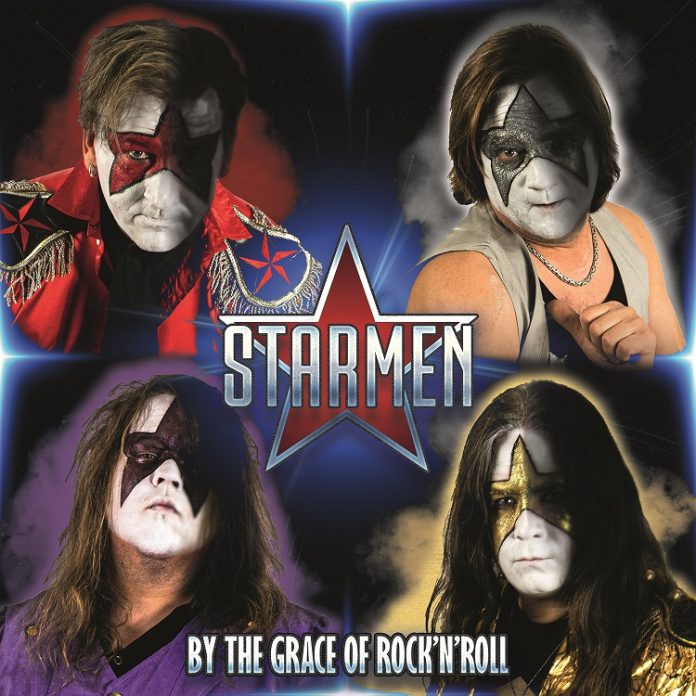 Copying and pasting things from band biographies is lazy and not what I do.

“STARMEN (Sweden) was formed in 2018 and was from the beginning just a fun idea, to make a record to all the heroes from the 70’s and 80’s classic rock-scene. Part of the tribute to the old rock icons was to create a grand gimmick around the band, where each member has their own colour and wears a makeup-star on their face.”

This review can basically finish there, as its everything you need to know about them.

But (and that’s the last time I am starting a sentence with “but” in this review) they present me with about three massive problems.

Not least of which is I am a child of the 80s, I was 15 when the 90s hit, so I grew up with these bands, but I don’t like gimmicks, I don’t like Kiss particularly, and I don’t especially care for Def Leppard with anything after the first couple of records either.

And yet (see, that’s better than “but” right?)I love Starmen. I said as much when their debut record came out – and this one is just as good.

Why? Well. Bombast, you see. A desire to forget the idea that less is more, and instead to be the biggest sounding record there’s ever been.

I am a sucker for an intro. Intro’s are fun. There’s always a gravitas. This has one. And moreover, when it finishes, and “Shining Star” kicks in, you just know that in their heads they are racing out on some arena stage with pyro exploding everywhere.

The title track couldn’t sound more 80s if it tried. Someone should play it to Joe Elliott, to show him how its done, and lets say it now when whoever it is of the guys that screams “people let me hear you shout” is most definitely in a Kiss tribute band doing the Paul Stanley bits.

“Kairi” channels some prime early Jovi with a desire to be Europe, and you don’t need to be a genius to spot a Van Halen riff on “Black Thunder White Lightening” – although the organ is proper Deep Purple.

The reason you almost are obligated to love this is that it is so unashamed. There’s nothing “ironic” or “tongue in cheek” here. No hint of a terrible Steel Panther type pastiche, instead “Kisses Of An Enemy” is AOR because the band love this music.

It also needs saying that Starmen are damn fine musicians. Able, you imagine to turn their hands to anything, and I’d be willing to bet these are all in some black metal band in their spare time hence the masks. “Pleasuredome” chugs and soars all at once which is pretty cool, while “Spaceplane” is so polished and 70s radio rock that I am telling you, even Night Flight Orchestra are looking on with envy.

It’s all nonsense of course “making friends with a satellite” probably isn’t possible, but the aim “to find a new planet where we see things eye to eye” is laudable. And rock n roll would be the religion, you can wager.

Look, this album is superb. It manages to find something new to say, even when it is doing something like Whitesnake like “People’s Parade” or the slightly ludicrous mid paced “Bad Habit”. It also has the odd moments of power metal, too. “Hotter Than Fire” has a tougher edge, and someone seems to be doing an Ozzy impression in places, which is fun.

Another thing about Starmen is that they get “no ballad” bonus points. Many (most?) bands of this ilk would be doing one that was a bit cloying. Not here, not Starmen. When looked down the tracklist before listening, I’d got “Angels Crying” pegged as the most likely. Not a bit of it.

In fact, this whole album “By The Grace Of Rock N Roll” is about escape. “Make a wish upon a shining star” says the last line of the outro. And that’s it, really, this is for the dreamers, who believe there’s light at the end of the tunnel. It’s just that its neon, shining and covered in glitter.