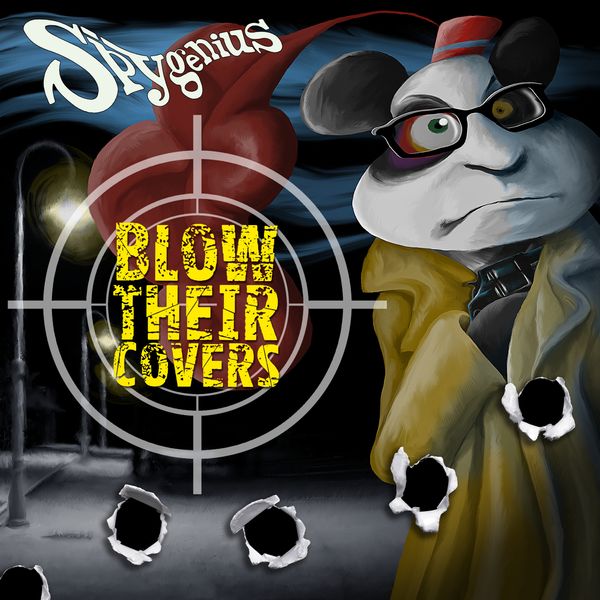 Spygenius are a four piece pop-combo based in Canterbury and South London comprising Peter Watts (vocals / guitar), Ruth Rogers (bass) Matt Byrne (keys) and Alan Cannings (drums). Their website states that they create catchy pop songs, with lyrical wit (with many a twist!) and elaborate harmonies to boot. What’s not to like!? After listening to `Blow Their Covers` the band`s album of cover tracks released last month, i`m inclined to agree.

The album opens with `Paper Sun / Love Is Only Sleeping` a couple of numbers from 1967 with the former brought to prominence by British psychedelic outfit Traffic and the latter by American the unappreciated pop and rock  band The Monkees. The tracks blend so easily into each other and I have to say the versions here are excellent. The bands imagining of Gene Clark’s `So You Say You Lost Your Baby` is another delightful take and I really loved the organ refrains throughout.

`Therapy` is the band`s take on LA pop rockers and labelmates Plasticsoul`s 2017 track and having found the original on the net, it`s a much slowed down version which brought the writer Steven Wilson to tears upon his first listen. Plasticsoul are now a band that I’ll be further investigating thanks to this introduction. We have an updated version of `Come On Home` which retains a nice retro feel. The original was recorded by The Springfields who had Dusty and her brother Tom in the trio and was written by Tom.

`Griselda` is a bit of a curve ball, a kind of folk tune which was originally recorded by Michael Hurley and The Unholy Modal Rounders. This modernised version is a sheer delight which strings, a jews harp, accordion swathes, and some cracking vocal harmonies. I had to admit i`ve always loved Squeeze and the band pull of a charming version of a slightly lessor known number with `Is That Love`.

`Please Stop Talking` is a fast paced, faithful and infectious re-evaluation of the London based

Kelly’s Heels composition. We have another Monkees tune with `For Pete’s Sake` and if you close your eyes, you could almost be back in the Summer of love. The vocal harmonies, organ tinges  and tapped tambourine are to die for.

`Murrumbidgee Whalers` is a kind of folk song come sea shanty written by Harry Robertson about the whaling fishers of Australia. The band pay tribute to The Soft Boys  with a dreamy version of `Queen Of Eyes`, sadly a band I don`t think I ever saw but have since seen singer Robyn Hitchcock on numerous occasions.

We have an interesting and at times a breathy twist on `Step Inside Love` a song written by Paul McCartney and a top ten hit for Cilla Black in the late sixties. The tapped drum rim throughout its journey was sublime. There`s a captivating run through of Buffalo Springfield’s `Rock ‘N’ Roll Woman` with some entrancing harmonic vocal melodies.

The album closes with Madness’s `Michael Caine` that sounded almost like Blur had covered it. A really interesting submission to end on.

I thought this was a marvellously entertaining and thoughtfully produced set of cover numbers, some that I knew and others that will lead me to explore the bands covered in more detail. The band have a number of albums so again I have some further music to explore.

Spygenius have been tagged as premiere purveyors of pop-psych and postpunk madness and on the strength of this release, it would be hard to dispute.

Take a listen and decide for yourself.