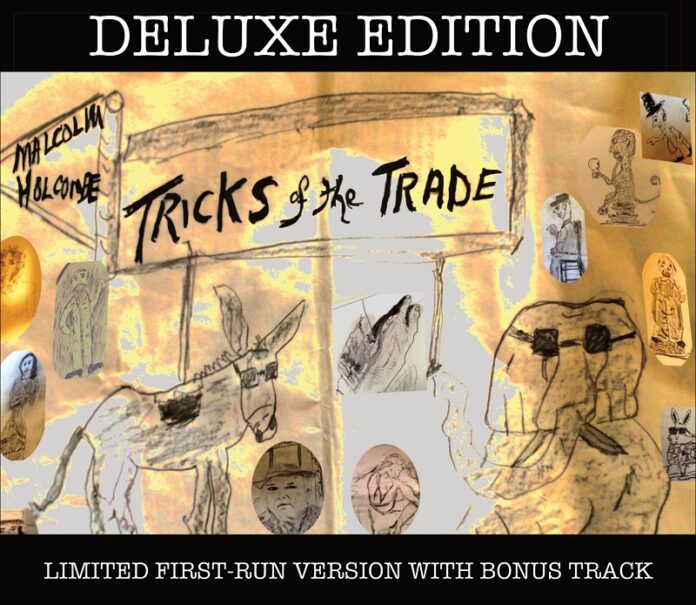 The last Malcolm Holcombe record I reviewed, 2017’s “Pretty Little Troubles” (there’s been at least one in-between) moved me to say this: “A record that might not immediately reveal its charms to you, is nonetheless one that – if you invest the time in it – is one to cherish.”

Pretty much, the same is true of this one.

Part of that is his voice – a growl of a troubadour, about halfway between Dylan and Tom Waits – but equally it’s the words. Holcombe is basically a dream for those of us who love lyrics, love words, and their use.

There’s a spoken word bit in the opener “Money Train” (there’s often a lot of speaking or near speaking in these songs) where he says “PT Barnum said ‘there’s a sucker born every minute’” and given that the rest of the song seems to leave you in no doubt as to what he thinks about the rat race and the grubby pursuit of money over people, the only conclusion is that in a world of fakers, here’s the real deal.

The old style country strum of “Misery Loves Company” hides a greater truth. There’s a pain in these words, but it’s a pain as RB Morris in the excellent biography he wrote on Holcombe, that is rather oblique. “There’s mystery in Malcolm’s songs like there’s mystery in life.” he said. And in that, is he not then something of a modern Dylan, given that you could give 10 people the lyrics to “Tangled Up In Blue” say, and get ten different ideas as to what it means.

That’s the skill of the best: they write songs that are both personal and universal. That’s Malcolm Holcombe too.

His guitar playing on the likes of “Into The Sunlight” gives it a sparse acoustic, but is perfect. While the more blues stuff he mines on “Crazy Man Blues” (he’s joined on the album by  Dave Roe and Jared Tyler) is a real highlight.

On that one he sings “ain’t it nice being white, in the president’s suit” and Holcombe is not afraid to show his contempt for modern day politics (the same was true of “…..”Troubles” too) but I’d wager that the systematic takedown of Trumpism – also see neo-liberalism in general – that is “Your Kin” has not been done more eruditely anywhere else. There’s such power in the thought “dirty water ain’t no act of god, but the cops take away your kin”.

The sparseness of the music (although the backing vocals from Mary Gauthier and Jaimee Harris are brilliant mix so well with the harshness of the voice and the stories. “Damn Rainy Day” reflects incredibly on….what? well whatever you’re thinking of.

There’s a metronomic quality to “Higher Ground”, a more poetic warmness to “Good Intentions”, while “Tennessee Land” is nothing short of stunning. “Ain’t nothing good to say about a politicians plan, when a family go hungry on a Tennessee Land”, and is he talking about the Steinbeck era, or is it 2021? You choose.

Whilst I’d never second guess him or what he means, then what I will say is when he sings about love as on “Lenora Cynthia” its as deep as it gets, and the title track acts as a bit of counterbalance. The magician in its words is a metaphor for life in general, and “Shaky Ground” fleshes the sound out just a touch to something that Springsteen circa “Devils And Dust” might have enjoyed.

That said, you can’t compare Malcolm Holcombe to anyone else, not really. He stands alone, and just as much as I’ve said that these songs belong to all of us, they are glimpse into a truly incredible Troubadour’s world. Just be glad we can share it.