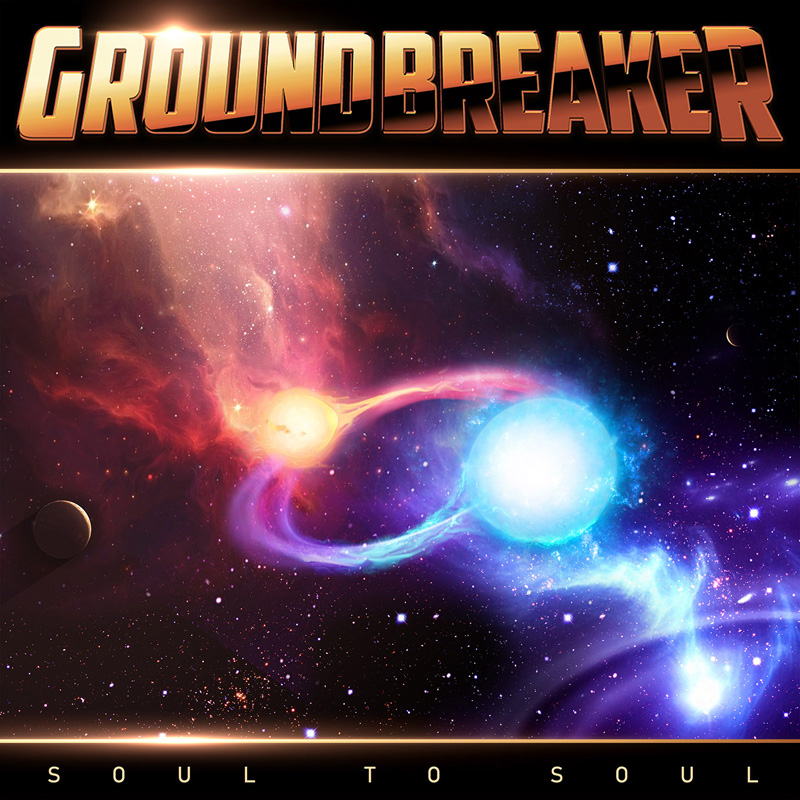 Usually, when it comes to music, my thing is the next thing. That is to say, I like to hear new band and open myself to new sounds.

But sometimes, in honesty, all you need out of 50 minutes is something that you knew was coming, but which is so reassuringly great that you can’t help but love it.

Think of it like that bit in Only Fools and Horses where Del Boy falls through the bar, or hearing Thin Lizzy on the radio. It’s just fantastic even though you’ve seen it and heard it about a million times.

That’s sort of Groundbreaker. Back in 2018 the President of Frontiers Records, Serafino Perugino, as is his wont, wanted to get the greats of the Euro melodic scene together for a project. And when Serafino wants these things, they happen. On vocals he got Steve Overland. For those who don’t know, then getting FM’s Overland in to sing is a basic guarantee of greatness. He’s up there with Johnny Gioeli and Jeff Scott Soto as the best voice there is – and he fetched Alessandro Del Vecchio to play keyboards and produce the thing. This was like the time when my lot were a goal up at Arsenal and the home side brought on Robin Van Persie as a sub. You knew what was going to happen.

And for Groundbreaker – and my lot – it did.

Which brings us to album number two, three years on, the band is different. Robert Sall (W.E.T) has gone, but what hasn’t altered one iota is the outright class and skill on show.

Right from the kick off of “Evermore”, “Soul to Soul” is everything you wanted it to be. Polished like the best Christmas silver (albeit there’s a weird breathing thing that Overland does on the song that I can’t unhear) and played by the best around.

Overland even has a go at some lead guitar on “Wild World”, one of many on the record that build in a way that only melodic rock can. Balladry? Kind of, but also not. That’s how they do things around here.

And it has, lets say, an 80s influence. Good grief if the title track was any more 80s Dynasty would be on the tv and I’d be at the school disco pretending a girl called Dawn liked me. Del Vecchio has nabbed the keyboard Eddie Van Halen used on “1984” I am telling you.

If, really, there’s no massive shocks here, then using a Snow Patrol keyboard line on “Fighting For Love” wasn’t totally expected, and if I was hoping that “Carrie” might be a Europe cover, then no matter, as its synth drenched fun of the highest order.

“Standing On The Edge Of A Broken Dream” has the air of a Bon Jovi demo on one of those bootlegs we used to buy, and “Captain Of Our Love” is resolutely unashamed to be a power ballad – and a damn big one at that, while the epic nature of these is underlined by “It Don’t Get Better Than This”, which in fairness, is merely a heartbeat away from being a power metal song. If Hammerfall did this, that’s all I am saying.

Everywhere you look on this album, there’s a gifted musician playing something brilliantly. Never better, actually, than on “There’s No Tomorrow”, perhaps the album’s most visceral moment. There’s a bit where Sven Larsson pulls a solo out and you kind of wish they’d done this more often.

That’s not to say there’s anything bad here. Not at all. This is one of the most consistent records you’ll hear. “When Lightning Strikes” is one, maybe, of the most memorable and with the best hooks, but just about anywhere, take “Till The End Of Time” for example, you’ll find something that is exactly what it is supposed to be. The last one, “Leap Of Faith” even manages to have a bit of a fist raising thing going on.

Look, If this isn’t going to win any prizes for originality – it really isn’t – then it’s worth considering the aims of the band when they got together. I am prepared to bet you that every one was met with “Soul to Soul” and melodic rock won’t be much better done anywhere else.