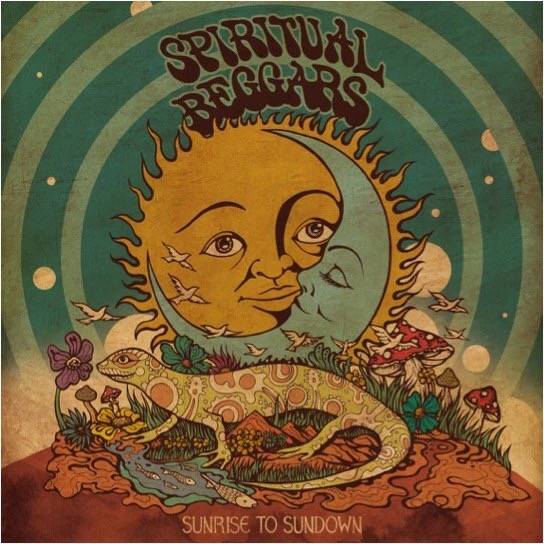 Classic rock’s kings? Not bad for a side project…..

It’s funny, when musicians with “other” heavy bands get together it’s usually over a love of classic rock. Nicke Andersson, let’s not forget was the drummer in Entombed, but what what he really wanted was to be in a band that sounded like Kiss, so the Hellacopters were born.

That’s been the case for Michael Amott for years and years. Spiritual Beggars has been his “other” band away from Arch Enemy for so long now that calling it a side project is essentially redundant and basically wrong. The fact is that since 1994 Spiritual Beggars have been releasing superior records whenever they get around to making one.

For this, their first in three years and third with Apollo Papathanasio (Firewind) behind the mic, they seem to have pulled out all the stops because even by Spiritual Beggars high standards, “Sunrise To Sundown” is an absolute corker.

It makes no attempt to hide its influences – indeed, the first single “Diamond Under Pressure” just about restrains itself when you guess that it wants to scream “we all went down to Montreux” at the top of its lungs – but neither should it because it’s done with such glee that no one can deny its sheer fun.

From the driving, insistent riff that ushers in the title track – and opening song here – it’s clear that everyone concerned with it, just enjoys the music, and you hope anyway, thoroughly enjoyed making the record.

Hooks and choruses are tossed out as if without effort and the Rainbow-ish “What Doesn’t Kill You” is a heads down, horns up classic, while the bursting to rock into of “Hard Road” alone makes it the best song on the album. Not for nothing, you guess does is first line: “I’ve never had nothing that made made me feel so good.”

Something primal is at work throughout, but never better than on “Still Hunter” and the pounding drums of “I Turn To Stone” and “Lonely Freedom” is built around a fuzzy, almost desert rock hum, as if to ensure the psych rock tag that SB get given is still credible.

Largely, though, “…..Sunset”, with keyboard player Per Wiberg the star of the show throughout, concerns itself with just making the type of record the men playing it wanted. “You’ve Been Fooled” for example is off looking for any kind of trouble it can possibly cause, while the closer “Southern Star” adopts a more mournful tone – and plays out with a magnificent solo from Amott.

That rather neatly sums up the album as a whole, because this, although the bands ninth album might actually be the best thing they’ve ever done.

Not bad for a side project, really.