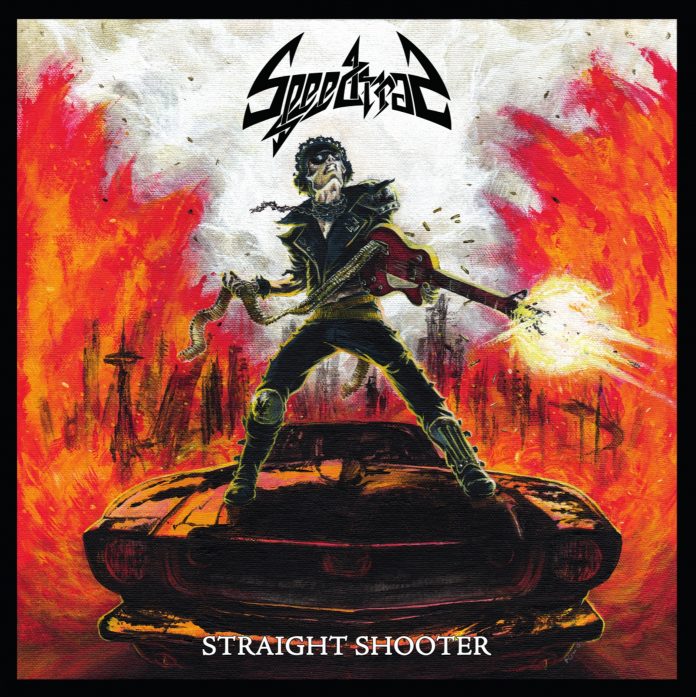 Finnish rock n roll that feels the need for speed


A few years ago there was the supposed New New Wave Of Heavy Metal. A bunch of magazines got excited by bands like Holy Grail, Enforcer and White Wizard. There was a problem though. Whilst they were good, they never quite took off in the manner that was expected.

But rock n roll is a hardy beast, so do you think it just faded away? Not a bit of it, as far as Speedtrap are concerned. The Helsinki five piece are firmly of the opinion that each song should possess two things. First, it should have as many riffs as you can shake your Marshall stack at. Second, it should, just for good measure, have more guitar solos in than it is humanly possible to cram into a few minutes. It should also be played very very fast. Then on the flipside, here’s a couple of things the song not contain: bullshit and frills.

Having established such a thing from more or less the get-go, Speedtrap proceed to play a collection of songs at breakneck speed with riff after riff after blinking riff (as The Wildhearts nearly said once) and with precisely nothing in the way of anything that doesn’t rock.

It’s fair to say that if you don’t like the opener “No Glory Found” then you may as well move on. The rest of it doesn’t do too much different. And moreover, if you don’t like it Speedtrap evidently couldn’t care less. They are too busy playing their music, whilst headbanging and with their feet on their monitors, probably.

“Running Rampant” for example, takes the opening riff from the first two Iron Maiden records, adds in a massive dollop of Motörhead, and then a kind of Judas Priest feel, and does it so enthusiastically that no one even bothers that it’s all been done before.

Not that these eight tracks are all three minute slices of racing down the highway that so many of their contemporaries content themselves with. There’s a couple here that come in around the six minute mark and as “Heavy Armour” rather neatly proves, this is just so they can pack more goodness in.

When they do shorten things down, as on “Serve Your Masters” – which starts like an earthquake and builds from there – there’s an admirable aggression on view, and on the sleazy little groover of a title track (surely deserving of bonus points for starting with a drum solo and still being three and half minutes long) they’ve got a bonafide belter.

Appropriately for a band called Speedtrap they end things with a white knuckle ride, and “Savage The Prey” does seem ready to savage something. Anything to be honest.

It’s easy to listen to this and say: “yeah ok, but where’s the originality?” That though would be to miss the point and also make you a bit of a tit. Speedtrap have made the album they wanted to make and packed it full of the music they love. And what is wrong with that?