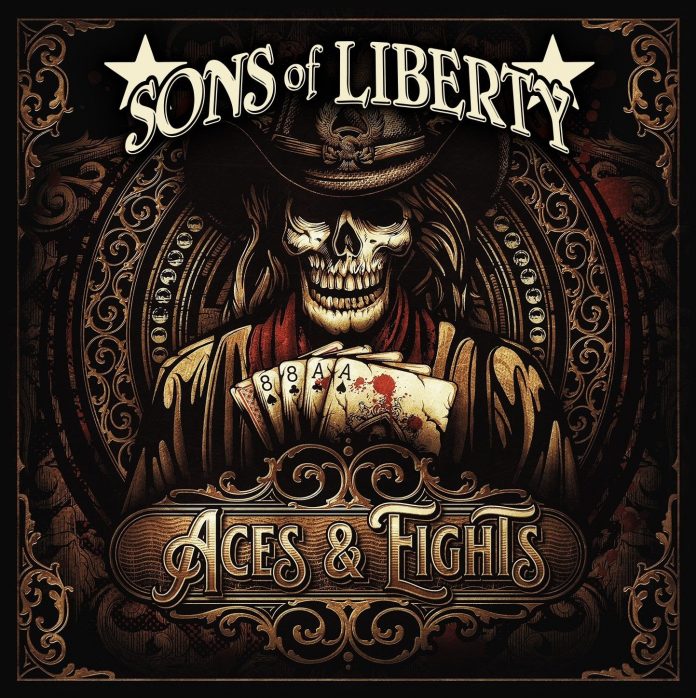 Back in 2018 I reviewed the Sons Of Liberty EP “Aged In Oak” and chirruped about their name screaming southern rock. It’s a good job I looked it up, because I’ll be honest, this time, I was going to talk about the cover art rendering any review pointless, about how you could imagine this playing in the Sons Of Anarchy club house just from one look at it, etc etc.

Now, that’s all true – and what’s more Sons Of Liberty know it, that’s why they play the music they do, it seems to me, but instead of the cliché, I’ll expound a theory that I’ve long held. There’s a reason that all these bands from the UK want to be in Southern Rock bands and Bon Jovi nailed the thing in 1986. I’m a cowboy, on a steel horse I ride. And I’m wanted, dead or alive. That’s it, the outlaw spirit, the link between rock n roll and the gunslinger. Hell, to this day at a Black Star Riders gig, Ricky Warwick introduces Scott Gorham as exactly that. It’s still as cool today as it ever was.

Which brings us back to SOL, and this record. Even Rob Cooksley Fred Hale, Andy ‘Moose’ Muse, Mark Thomas, and Steve Byrne would concede I am sure that no wheels are being re-invented here, and there’s a damn good reason for that: the wheel works. My car has four of them still.

But if they aren’t going Avant Garde, then they are shaking things up ever so slightly. “Ruby Starr” (which gets bonus points for having a serious guitar solo) is what I imagine Airbourne would do if they played Skynyrd, or rather more, if Joel O’Keefe was smashing whiskey bottles over his head and not cans.

“Don’t Hide Behind Your Weakness” is the type of thing that got them opening for Skinny Molly, and the lyrics are rather more serious than elsewhere. And whatever else this record is, then its impressively diverse, “Black Blizzard” does balladry really well, for example.

Elsewhere, though, “Beef Jerky Boogie” sounds as exactly as you imagine except for the twin solo, but as Cooksley points out: “We take what we do seriously, but that doesn’t mean you can’t have fun. That’s what rock n roll is all about!”

It’s also about swagger, too  and “Damaged Reputation” has that in spades, while “Texas Hill Country” chugs along and gets bonus points at MV for mentioning Waylon Jennings, as all good ol’ boys should, after all.

It is, totally and absolutely the belief of this website that if you are doing hard rock and it doesn’t borrow a bit from AC/DC then you are doing it wrong. Thankfully “Fire And Gasoline” concurs. “Doc Remedy” races down to the honky-tonk and is basically the musical equivalent of that episode of The Simpsons where Grandpa makes an aphrodisiac in his bathtub, while “I Come In Peace” is the yin to that yang and is grown up and superb.

“Dead Mans Hand” adds a blues touch – as perhaps you’d expect when they are working with Josiah J Manning of Kris Barras’ band – and even if you aren’t a card player you can get the gist.

It ends with two more of the knockabout ones. “Lights Are On” seems designed to be played live and have a call and response bit, and “Whiskey Is My Vaccine” is a 12 bar blues romp that is as charmingly daft as its title. Now, I don’t drink, so I’ll stick to the Astra Zeneca that I had thanks all the same.

“Aces And Eights” though, is the cure for what ails (sorry!) and the fact that everyone here is totally invested in it from start to finish and seems to live and love this music, makes it impossible to think this isn’t a winning hand.