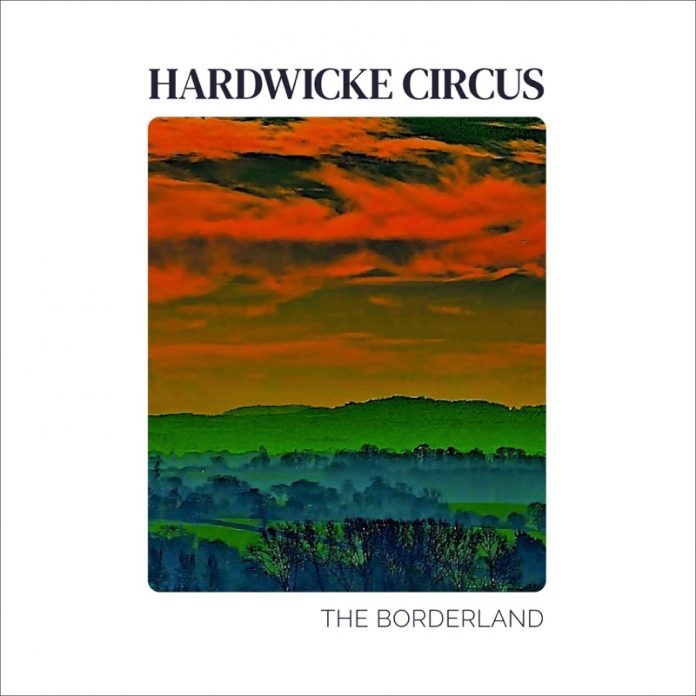 Hardwicke Circus are not a band i`ve come across before despite having played over seven hundred gigs, supported both Bob Dylan and Neil Young and made the local ITV news station in Cumbria. They comprise Jonny Foster (lead vocals, guitar), Zack McDade (guitars, vocals), Ben Wilde (bass, vocals), Lewis Bewley-Taylor (keys), Andy Phillips (saxophone) and Tom Foster (drums, vocals). This proud Carlisle based band, named after a roundabout in their hometown were due to play the South By Southwest film, interactive media, and music festival in Austin, Texas but due to the covid restrictions they were unable to attend. The band also had 165 gigs cancelled which would be the death knell in any other group, but they took the opportunity to rent a farmhouse in the Yorkshire Dales and record their debut album `Borderland`.                       The album opens with `Guiding Light` with its driving drum and bass rhythm section leading us in before Johnny`s deep vocals join. The chorus almost has a Simple Minds texture about it. At the midway point there`s an interesting guitar solo accompanied by some organ like keys.  We also have a delightful saxophone solo towards the end with some sax tinges throughout the song. I felt that `No Surrender` was a song made for a live occasion. It really seemed to have it all, catchy guitar chords, delicate saxophone tones and harmonic backing harmonies. It even has a break towards the end allowing the audience to repeat “No Surrender” along with the band.

`Lockdown` had a funkier vibe about it with hand tapped percussion. I wasn`t quite sure about the high pitched vocal harmonies but the brass, guitar riffs and keyboard solo more than made up for them. There seemed to be a message of hope in `Walking On Broken Glass` a quite anthemic tune which appeared to inspire a feeling of positivity. Another track that enjoys some delightful saxophone tones, a brief guitar solo and some tambourine tinges.

`Carry The Torch` begins as a stripped back melancholic number about a lost love but grows from acoustic guitar, tapped drum rim, piano keys, and aching vocals to more of an expansive musical gathering with a poignant saxophone solo and underlying piano traces. We return to a more uplifting tune with `My Sweet Love` which almost seems the opposite of the last number with a sort of stirring declaration of devotion.

`Hands Up Don`t Shoot` opens with a riff similar to “Owner Of A Lonely Heart” before branching off into a kind of rock oriented protest song against gun crime and probable racist abuse. I really enjoyed the vocals that had a hint of Cumbrian dialect in the delivery, especially the chorus. There was an almost Springsteen grandiloquence about `Nowhere Left To Run` with keys and saxophone almost vying to be heard. Again it`s another light, breezy, pop, funk rock offering.

`The Ballad Of The Gypsy King` is a quite captivating and rousing tribal folk tribute to two time world heavyweight boxing champion Tyson Fury. We return to a more empowering anthemic rock aria with `Let`s Make New Mistakes` a number that quite races along.

`A Reason To Believe` opened with an early Dexy`s Midnight Runner`s texture and is another quite bombastic composition with all you`d expect and a positive message of hope thrown in for good measure. We end with `The Debatable Land` which is a kind of call to arms musically and has an almost Celtic folky vibe to it. A number that has all it`s roots in the land of their birth.

`The Borderland` is a well thought out, measured, and superbly executed rock album that seems to have its origins in Eighties pop rock with hints of bands like Simple Minds, Deacon Blue, and Big Country. The amount of hard work and time spent on the road has ensured that these guys are no slouches musically. A band that will go down a storm at any festival that would be smart enough to book them.