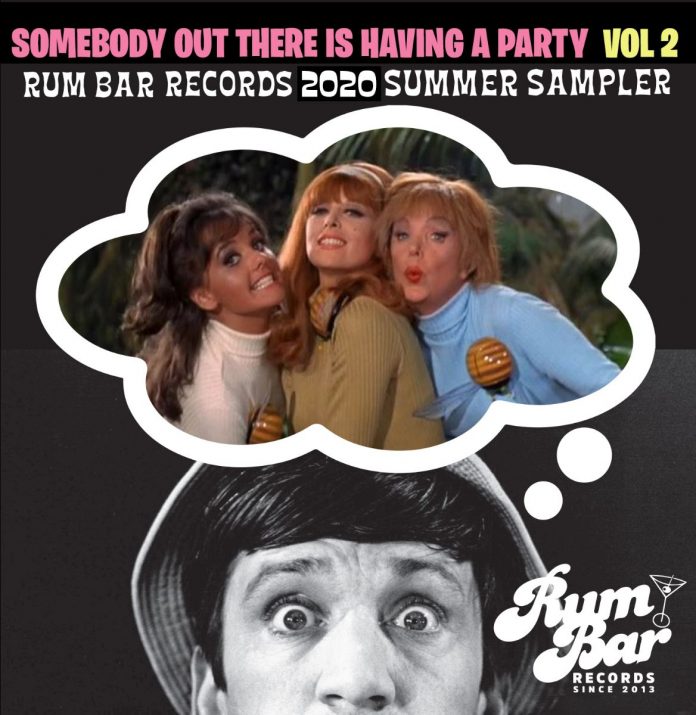 The very first words on “Someone Out There Is Having A Party”. Sung by Stop Calling Me Frank. There might be. But if there was, Rum Bar Records would have signed them.

The attachment to a label. I’ve written before of my teenage shopping trips for cassette tapes that often ended: “well, its got the red and white Atlantic spine, its bound to be good” and when I reviewed the Badly Drawn Boy album recently there was a homage on it to Tony Wilson. The Head Honcho at Factory Records. I know a chap that was always furious because of the way they catalogued their releases meant he could never collect them all (one was a building, another was a lawsuit).

So the attachment to a label, it runs deep. And as much as we keep being told there is a no music industry these days – and to a large extent that is true – there are many labels that keep finding brilliant stuff and giving it to like minded people. That last bit is important, “like minded”. Gone are the days, of course, that music is something we can all share, but when some of us do, that is a truly magical thing.

So it is that when a Rum Bar release drops into the MV inbox you know that nine times out of ten it is getting reviewed, but on every single occasion it is from the heart.

The sort of music that Malibu Lou (the landlord at the Rum Bar) deals in is actually, broadly speaking, clear from the cover. From a different age, almost. Wholesome on the outside, but strip it back and very often it is not as it appears on the surface. But whether its is power pop, punk, Americana, surf rock and all the other things they do, you know the bands are into it as much as the label.

And there are some wonderful songs on this 33 song sampler of what they do – it’s pay what you like, naturally, because this truly is all about the music.

I’ve reviewed all those releases on the site (I have done most of them), but even for me this was a voyage of discovery. The Blondie-esque stylings of “Vampire” from Heatwaves, a Spanish band that Lou has somehow found, the throbbing bass of “Right On Sister” from Live Ones, or the Southside Johnny tastes of the Boardwalk that are provided by the Swindedells “Try And Stop Me”, there is much here that I have never heard before.

This label, though, has always been about finding new things, for me. Whether it is The Connection,  Brad Marino, or Nate Coles (who aren’t here) or Dirty Truckers, Tad Overbaugh, The Hi-End, The Cheap Gunslingers or the many, many more that are, it’s genuinely and completely honestly been responsible for opening me to new things and changing my tastes.

And they keep coming. There’s a band called 45 Rally here – not one I know – and on their song “Grouchy Fauchi” they offer this: “he’s more slippery, than a bucket of KFC”. If that alone doesn’t have you downloading this then I can’t help you.

After Gotham Rockets “Bad With Girls” a real cracker, it all ends with “Last Man Standing” by The Dents. It seems like a good place to see it finish too, because there is a reassurance, a comfort even, in this: whatever happens, music will never die as long as there are people with the passion of Malibu Lou around.

I’ve never met him – given that he’s in Boston, I am in the UK and view travelling anywhere that involves an overnight stay about the same as many view a trip to the dentist, I probably never will – but the connection is still there. Through the sounds.

And one final thing: Lou always finishes his emails with a simple, “See you at the bar!” I’ve never had the heart to tell him I don’t drink, but I’ll raise a coffee to you all the same, my friend.  Thanks for the music.

To pick up your copy of the sampler, go here: https://rumbarrecords.bandcamp.com/album/somebody-out-there-is-having-a-party-vol-2-free-digital-summer-sampler