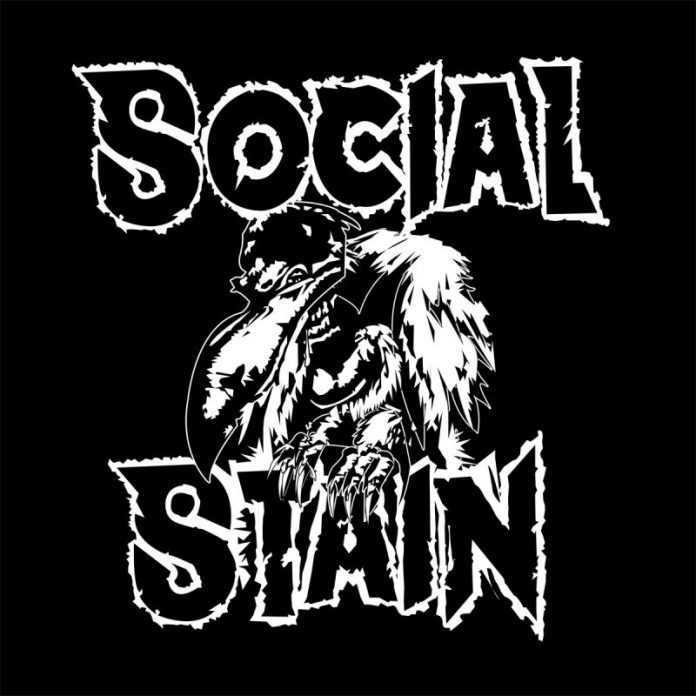 Don’t pine for the good old days, they are still here

There’s always something enjoyable about a record that actually starts with a guitar solo, in that respect Social Stain have everything in their favour, because “Breakout” is so gleeful that is pretty much bursting with rock n roll. And you suspect that’s been the point of this since the start.

The music on the debut record makes good on his wish too.

Not least because following this wonderful opening is “Dead Man Talking” which sounds about as ebullient as the Backyard Babies would be if they’d been on a two day Wine Gums bender (ok, we suspect Dregen and co might prefer something stronger, but you could be the point, this is as excitable as the three year old on Christmas morning.)

Mention of Backyard Babies and their ilk is reasonable too, for another reason. “Social Stain” borrows from that mid to late 90s era pretty shamelessly. Those that enjoyed The Hellacopters, “Infernal Love” era Therapy? And The Almighty’s later hard rock work will find much nostalgia in “Red Star Rising”  with its chunky chorus and meaty hooks and if the stadium bothering groove isn’t enough then the title of another track here might give it away. These are “Good Old Days” indeed.

Pleasingly there is no real attempt here to do anything particularly modern. “Social Stain” isn’t the type of album that needs to go down the route of finding some made up genre with the word “core” stuck on the end. “Joke’s On You” contents itself instead with being biker rock with a bubblegum sort of punk sheen.

It works perfectly too. “(Ain’t Got) Time To Bleed” has swagger allied to its skill, “Possessed” on the other hand is fast and furious and moreover has no interest in being anything else.

There’s a ballad here – the bluesy and gentle “At Peace” but you suspect that its only here because they decided they’d better have a ballad. There are touches of Metallica’s slower numbers here, but Social Stain are actually far better when they let it go as on the superb “The Unknown” and the thumping “Walls.”

The last track basically kicks in where the first left off and “Backstabber” like the rest would no doubt sound brilliant live.

In many ways the last two songs should be swapped around, because like other bands before them, they’ve even got their own eponymous anthem. This is a good’un though, if there’s been a better opening couplet anywhere in years than this: “I was told to expect to the worst/so I braced for a punch in the face/and got a kick in the balls instead” then we haven’t heard it – it sums them up too. It’s brash, snotty, fun and exceptionally well conceived.