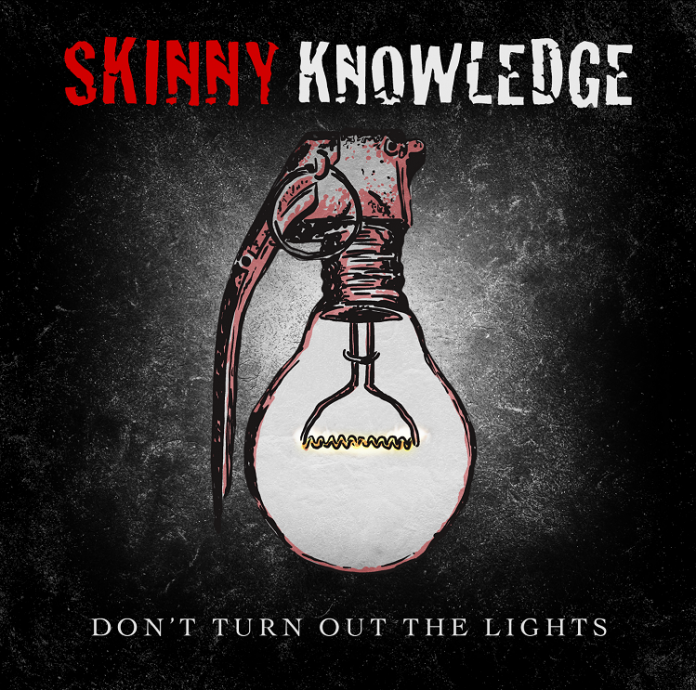 Skinny Knowledge are in interesting dichotomy.

The first reaction you have to the Bournemouth mob is simple: “god, is there a 90s revival that I didn’t know about”.

The riffs are big and thick, but if you went to the same gigs as me in the 90s – the Feeder’s, Stereophonics, The Wildhearts and all kinds of punk (ish) bands – then you’ll know the form, but then listen to it again.

See, if this is a punk (ish) band, then they are Green Day, because these boys got stuff to say. The title track, for example, has a gravitas that you maybe didn’t spot at first, an ambition, perhaps, to do something. No, more accurately, to mean something.

The opening lines sneak up on you, more or less from the ashes of a tune, they kind of rise up. “Another time, another day, in a place where none of us remember the way…..”. There’s a poetry, a bleakness here, that’s at odds with what you might expect.

As singer Andy L Smooth (ace name) puts it: “I love music that truly makes you feel something. Music that’s REAL and inspires you and others to move mountains”.

Now, I have to admit here, I can be a bit of a philistine. I was once blocked by someone on Twitter.  She writes particularly verbose reviews and likes to be the centre of attention. One night she said “when I review a gig I want to make you feel you are with me”. She took exception to me quoting the tweet and adding the words: “fucking hell, I wouldn’t take a eulogy that seriously, I fill my reviews with knob gags and references to Thin Lizzy”.

That’s only partly true (I don’t do knob gags) and I do get it. This website has helped me through some dark times over the last 12 months and no one loves music more than me, but I guess it all depends on how you engage with music generally or Skinny Knowledge in particular.

Because they are – like us all I suppose – a mass of contradictions. On one hand, “Imagination” is as catchy as the Foo’s, on the other Smooth delivers a verse in a growl, the type of thing that normally gets the delete button pressed on my iPod, frankly. Not here, though, because this is one of the more interesting releases of recent months.

“Alive” is bratty and potty mouthed, the bass thunders too, but good grief, these boys understand harmonies and it just sounds fun. The lyrics, though, are anything but. That’s the thing that I love, about them. The turns, the twists – like here there’s a full on Enuff Z Nuff bit followed by a proper metal solo – and the feeling that no one knows what’s happening next, not even the band.

The angular riffing of the astonishingly good “King Of Nothing” could have come off “Polythene” era Feeder b-sides (where they really showed their stones) and I swear to you that if Billy Joe and the chaps put “Keep Me Out Of It” on one of theirs, then they are collecting another gold disc.

Youthful, grungy energy abounds on “Not Coming Down”, and if one line was to sum them up, then “lets lose our inhibitions” is it. That’s the vibe. And you can see why, Smooth talks about it in his interviews. He was out of love with music, he said, but forming this band gave him the spark. “Getaway” is both your proof – and his validation. Its in every note.

There are occasional moments of real power here too. “Sayonara” has a crushing riff, but moments where it is so fragile it could smash in two, and if you didn’t expect an Elton John style piano ballad (I didn’t to be fair) then “Wheel Of Love” got you sorted. Willie Dowling would be proud of the harmonies here and he’s the king of power pop, so……

SK follow this up though, as you sort of knew they would, with brute force. “This Time” is equal parts Dinosaur Pile-up and Puppy, yet a copy of neither, while “Make A Change” is the type of thing that Ginger sticks on his solo records.

It sort of doesn’t matter what happens on the album, either, it just as an energy, an ebullience, and a desire to stick a middle finger up to anyone who isn’t with them. “Take The Blame” is pretty much “proper” punk, if you will, and “Heavy Metal Interlude” has a tinge of Metallica, and appears to be here just to prove that SK are only just getting started.

“Stand Alone” borrows the chug from “29xThe Pain” and makes it a sort of ballad, but it also is apt, because whilst I have chucked about 50 band references into these 800 words, none of them quite nails the fact that Skinny Knowledge have emerged from nowhere with their own sound.

After slagging off “verbosity” in reviews, I am aware of the irony that this is longer than War and Peace, so I’ll just say this: “Don’t Turn Off The Lights” is the musical equivalent of biting into the sweetest, juiciest piece of fruit you have in the kitchen – then finding something very unpleasant living beneath the skin.

Magnificent, and entirely on their own terms, Skinny Knowledge are ace and that’s all you need to learn.