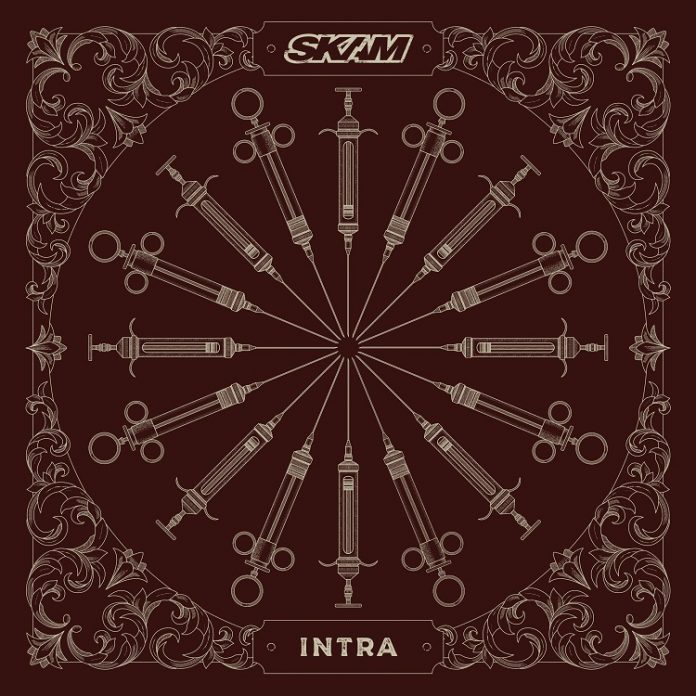 “On the new record,” says Skam singer/guitarist Steve Hill, “we tried to do a lot of different stuff, but sometimes you want to crank out a big, fat E Chord.”

Steve said those words on 14th November 2014, and I was there, in some venue in the Black Country that was, if I recall, a converted Woolworth’s (I am sure that’s correct) when Skam opened for Aussie heroes Massive.

It was a great gig, and those words seem to resonate for two reasons. First they shine a light on the fact that Skam, now signed to the Golden Robot Label – home to a version of LA Guns, Phil X and Gilby Clarke amongst others – are experienced hands, but second, that desire to rock is all over the “Intra” EP.

The first single from it – the fabulous “One Track Mind” – made headlines last year when it emerged, as it featured the talents of Paul Mahon of The Answer (an old friend of the group) who lets rip here on his solo) but its more the consistency of “Intra” that shines through here.

d it seems like they are delighted to be back. There’s just a sense of enjoyment over “Green Eyes” and a real feeling that they’ve burst out of the blocks with it. Maybe its because I haven’t seen a band live for over a year but I found myself picturing the chord kicking in as they emerged onto a stage.

If that’s a wake up call, as it were, then the chunky groove of “Wake Up” is built on the bass of Matt Gilmore and its noticeable here that they sound just a little heavier than before. “How Many Times” has a harder edge – but also gets rock n roll bonus points for its heavy cowbell use as Neal Hill seems to enjoy himself.

And this might be a personal taste thing, but it is a brilliant thing that the pace never drops here. This is not a record that needs a ballad, and it doesn’t get one. Instead it gets the defiant and belligerent “Fight The Fire”, another which rather underlines that this is a band that has discovered the joy of writing hooks so big you could hang your coat on them, frankly.

Special mention too, to the other Hill, who tosses out riffs with something approaching abandon here. “On The Run” has a slashing one, that were it some overhyped and boring American outfit (hi, Shinedown, I haven’t mentioned you for a while) would guarantee a gold disc. As it’s a three piece from Leicester there probably will be less hype.

The vagaries of taste not withstanding, this is Skam’s best work (and their other stuff is ace, too by the way). Get “Intra” the groove, as Madonna nearly said once.