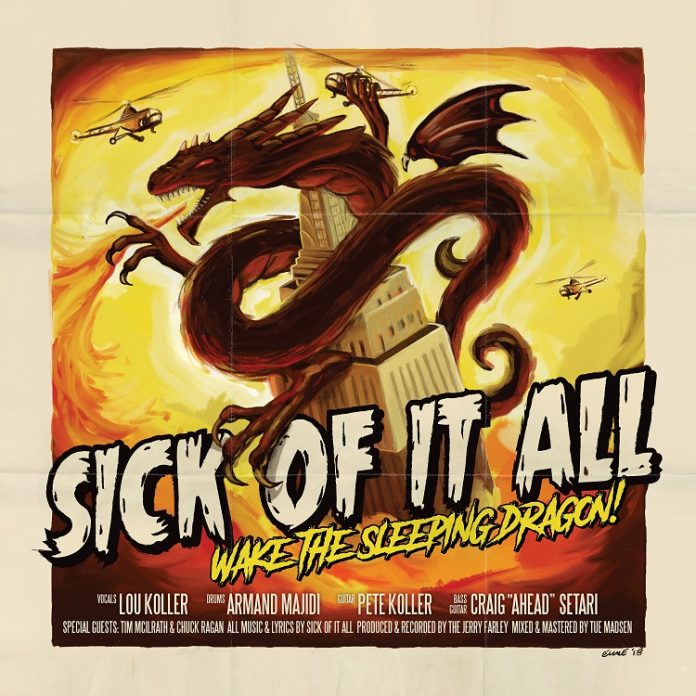 After 32 years at the forefront of the Hardcore Scene, you could forgive Sick Of It All, perhaps if they toned down the anger.

Right at the end of “Wake The Sleeping Dragon”, comes a  track called “The New Slavery” – it should also be added, perhaps that this is song 17 and is barely half an hour in to things – and the last words on it, and thus the album are these: “This is my home” they scream, as if they were the last gang in town.

The world is in a bad place. They’ve got Trump over there. We’ve got the evil Maybot over here. The rich get richer everywhere, the poor get poorer. Foodbanks are uplifting says that piece of filth Jacob Rees Mogg. That, essentially, is why we need SOIA.

It is fair to say they don’t subscribe to this view. On the vicious put down of modern capitalism that is “Work The System” they put it thus: “just a drop/ one drop from the bucket would suffice/just one drop would improve so many lives/just one drop from that fucking one percent/just one zero of their crazy dividend.”

All of that may seem that “Wake The Sleeping Dragon” is an entirely political record. And to a large extent it is, only in as much as everything is political. They do, though, afford themselves a few different topics. “That Crazy White Boy Shit” is a homage to their heroes Bad Brains, “Bulls Anthem” – which oddly sounds like a sports chant – is about animal cruelty (they’re rooting for the bull….) while elsewhere, they’re setting social media in their sights, “Self-Appointed Shithead” is the sort of thing that everyone with a Facebook page should be force-fed until we close Zuckerberg down.

Everything here, in truth, sounds like its in a rage, and everything here as a result is going to sound wonderful when it hits the moshpit. There is a moment in “2+2” when Lou Koller yells “we’ll set this fucker off….” and as he does, you can only guess at the carnage. “Beef Between Vegans” seems to suggest that we’d be better off fighting together and it is a feature of the whole record – and it must be said the whole career of SOIA – that this is all about empowerment, taking back control.

“Mental Furlough” actually sets Sick Of It All apart from the likes of Terror – who’s wonderful album I reviewed the other week – as where there was nihilism, here there is hope. “its time to set things back the way they were before – regain the sense of pride at my very core”. That type of stoicism is probably what has driven SOIA for so long.

As always with hardcore, the musicianship is often overlooked, but it is stunning. Craig Setari’s bass is at the heart of “Deep State” – an attack on the mainstream media, while “Bad Hombres” is self-explanatory, but amounts to an incredible excoriation of Trump and his wall.

Which in many ways, brings us back to where we came in with this. Why the anger after 32 years? Look around you, if you can’t get angry, then what’s wrong with you? This could provide your soundtrack, but Sick Of It All would probably rather it was your starting point.