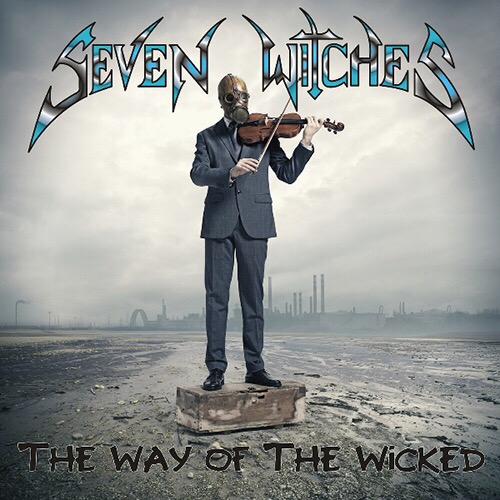 Just being from New Jersey is enough to get Seven Witches considerable bonus points. The place has always seemed mythical to us on this side of the pond since those Bruce Springsteen records and their tales of Turnpikes and the wastelands of the state, then there’s Bon Jovi. Say what you like about ’em in 2015 but from 1986-95 those boys had it nailed. And all of this is before we even get to The Sporanos.

The point here is that those words “New Jersey” resonate with music fans everywhere. And like a metal band from Birmingham, or a group from Detroit, that’s a rich legacy to compete with.

Seven Witches know this too. Good god, to say these boys had been around the rock block is like saying Lemmy likes the odd Jack Daniels. The list of bands that their members have been in over the years is something to behold. Amongst many, Guitarist and leader Jack Frost is a Savatage boy, bass man Ronnie Parkes was in Bonfire and drummer Johnny Kelly was not only in the incredible A Pale Horse Named Death, but a little band you might remember called Type O Negative, so it’s fair to say they aren’t worried about expectations, or history. They are part of rock history themselves.

It is perhaps interesting that this is the bands (the only constant is Frost) ninth record and they’ve been doing this since 1998. On this, they seem to realise that they have made a definitive statement. A settled line up for the first time for ages (ever?) helps but right from the off, this is very obviously very special.

SW tell you they are influenced by the music of the 1980s and whilst clearly they know their way around a Metal Church record, that description is rather selling themselves short. Opener “Way Of The Wicked” for example – perhaps deliberately – throws you off the scent. Starting like its the theme tune from Game Of Thrones lulls you into the thought that it’s a power metal record. Then the chugging, almost stoner rock riff kicks in and we are away. “Better Days” melds the riff from Motley Crue’s “Looks That Kill” with a hook that won’t let go, and the confidence that clearly is flowing through the superb “Among Us,” a song which almost appears to be bursting to rock it’s socks off, now takes the record to the next level.

Trying all different sorts of rock n roll seems to be the aim here, as “Soul Searching” adds a swagger and a groove. Best of all is “Dreams.” Just a a classic old school heavy metal track, it’s one many to start with a solo before singer Anthony Cross does a manful job.

“Way Of The Wicked” by now has its leather trousers on and is playing to the gallery. Work like “When I Flew” alters the formula slightly, firing off a staccato riff with glee, and “Angel Of Salvation” – which opens with yet more excellent guitar work – is a little more mid-paced and perhaps what passes for a ballad around here.

“Rise Up” is a darker affair, the opening strains echoing the thrash greats at their most foreboding, before it turns into a slammer that is the heaviest thing on offer here.

It’d be wrong to call this original. It doesn’t need to be. It’d be entirely correct to call it brilliant. Seven Witches have come up with quite a brew.