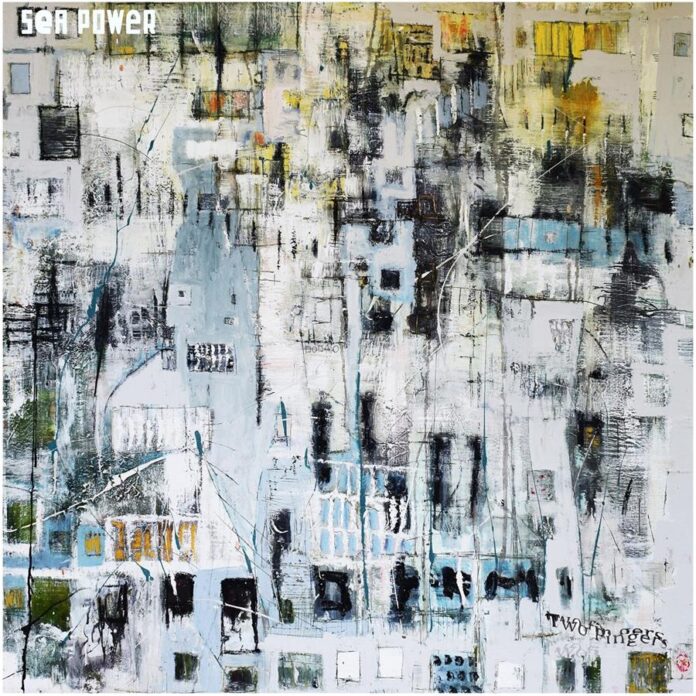 Sea Power have their roots in Cumbria, from there the initial trio of brothers Yan and Hamilton, and their schoolfriend Wood relocated to Reading and formed a band, augmented by guitarist Noble whom Yan met whilst studying at Reading University. Initially named British Air Powers, they recorded a four-track demo before moving to Brighton. Phil Sumner and Abi Fry joined the band in 2006 and 2008 and this sextet has remained constant since. They renamed themselves British Sea Power and then on August 9th, 2021, the band officially changed their name to “Sea Power”. This was due as the band relate to “a rise in a certain kind of nationalism in this world – an isolationist, antagonistic nationalism that [they] don’t want to run any risk of being confused with.”. The band have a new album `Everything Was Forever`, their first for five years out this month. The title was inspired by Alexei Yurchak’s 2006 book Everything Was Forever, Until It Was No More: The Last Soviet Generation, an overview of Russia as Glasnost and Perestroika ushered in amazing changes.

The album opens with `Scaring At The Sky` which is a quite dreamy gentle introduction into this new release and seems fairly introspective almost a self-analytical examination of oneself. We have almost the polar opposite with `Transmitter` which is pretty fast paced with flowing synths that gave it a quite cinematic texture at times. It marches on and has a delightfully compelling sense about it and I felt myself being overwhelmed and drawn in. It`s seemed like a commentary from someone who has come to terms with who they are and are questioning somebody who was close but seems a loose cannon these days.

`Two Fingers` according to co-frontman Jan Scott Wilkinson is “part inspired by our late dad. He was always giving a two-fingered salute to people on the telly – a kind of old-fashioned drinking term, toasting people or events” It seems to be an emotional offloading, a remembrance of those who`ve gone and also a contradictory sort of up yours but we also love you statement. There was a hypnotic drum machine like robotic beat to `Fire Escape In The Sea` which was a reflective musing with some sweet guitar chord riffs that floated throughout.

I felt there was an almost sense of urgency about `Doppelgänger` as it raced along with lyrics that were fairly rapidly shared. A perception of somebody real or imaginative taking over your being or self was almost tangible in this uneasy offering. There`s an underlying constant drum machine rhythm to `Fear Eats The Soul` which is a quite mesmeric but slightly disturbing piece that seems to reflect a kind of loneliness or melancholy.

`Folly` is quite anthemic and has a kind of electronic marching pace vibel, a kind of everybody get on board sentiment. It seems to be a reflection on maybe taking more control of what`s going on in your life and trying to support change before it`s too late. I read that `Green Goddess` is a love song about everything green from the Lake District to the New Forest. The places that Jan Scott Wilkinson loves to be which are quiet and restorative. It`s also a love song for his wife whose favourite colour is green. Again it`s another swirling expansive dreamlike larger than life composition.

`Lakeland Echo` is a bit of a strange one, quite ruminative and contemplative with sounds that tend to wash in, over and around you. It seems to garner a kind of potency as it evolves and becomes quite loud in volume towards the latter section. The album closes out on `We Only Want To Make You Happy` which is a wonderful sentiment to strive for and musically it`s another otherworldly and imaginative submission.

`Everything Was Forever` is an album that I think will stand up the more you return to it. It`s a kind of opus that maybe is too difficult to take on board immediately but needs to be allowed the time to seep into your life gradually. The lyrics are a little imperceptive at times but allow you to maybe interpret them in your own way. I felt it was a reflection on what has happened recently globally and maybe an encouragement for us all to reflect and review our lives, our impact on the bigger picture and maybe make changes. But with that said i`m sure we`ll all acquire something different and that to me is the beauty of something like this.