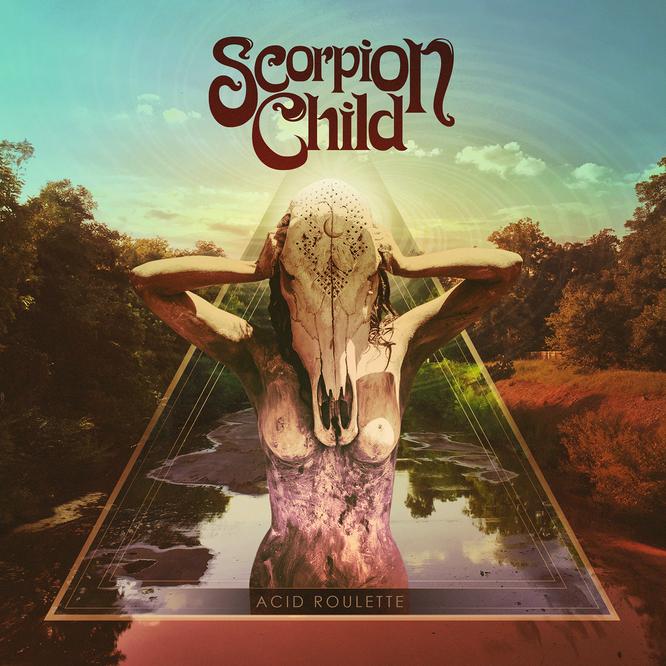 Scorpion Child’s début from three years ago was one of the best records of recent times, never mind whether they were first efforts or not. Now though,, it is a very different band that greets us on album number two.

The good ship Child has been forever in choppy waters since their inception it seems and this opus was no different with three new members, but happily two things haven’t altered:

Aryn Jonathan Black’s voice for one, and the big one….the songs are absolutely magnificent.

“Acid Roulette” is a concept album with Black explaining on this very site that: “Acid Roulette chronicles the life trials of a traveling man who was imprisoned for a murderous crime. He was forced into confessing by his wife and her wealthy lover so that they could live out their romance without him in the picture. Once sentenced to a life’s term, he goes through extreme emotions dealing with the only woman he’d ever loved taking everything he’d known as “real” away from him. He has to create and redefine his own reality accompanied by its roller coaster of emotional reflection. He experiences many different psychological changes throughout the years and escapes by means of drugs and his writings. These songs become his diary of a madman. The focus is mainly on the seasons in a year, for each song represents a month. The songs exist to drive home the full power of human emotion as many albums do, however, Acid Roulette wires us into those extremes.”

Look, its your choice whether you buy into – or even care – about the narrative (frankly MV can go either way) so allow us to put it into slightly simpler terms: Hell, yeah, the damn thing rocks with bells on.

They proved as much in the spring of this year when opening for the mighty Monster Magnet they promptly played vast swathes of the material here despite it not being out for months, and well they might have too, because given the benefit of what the none musical amongst us might simply call “a proper listen” the sheer scope and ambition of these Texans shines through.

“She Sings I Kill” opens up on the back of vast swathes of sound as they occupy the type of Lep Zep ground they were so awesome at in 2013. Not that this is in any way some kind of retro pastiche of half-baked crap, this is the real deal. Yeah, it knows what its influences are, but “Acid….” Is a hell of a trip.

The opening riff to “Reapers Danse” for example is one of a heavy rock band – and the breakdown slams – and the swirling “My Woman In Black” is an almost timeless slice of all that’s good. Better still, however, is the quite astonishing title track. No one has used organ this well since Deep Purple on a heavy song, and its almost prog tendencies will make it one of the songs of 2016.

If those are the first four songs, then trust us, there’s barely any let up elsewhere either, “Winter Side Of Deranged” will be instantly familiar to anyone who loved the debut,  and the thought that the whole record would disappear off into the woods with a Ouija board at the drop of a hat is never far away throughout, but on “Twilight Coven” it is right to the fore.

“Blind Man’s Shrine” is a piece of almost stoner metal, stalking its surrounds like it wants to crush, and as if to prove there is nothing that Scorpion Child can’t do there’s a thumping urgency to “Moon Tension”, while the marvellous “Tower Grove” really lets its guard down and is downright rifftastic fun.

If “Might Be Your Man” builds up on a wall of organ, then its true skill is that it sounds enormous, and “Addictions” closes the record with a twisting, turning thing with myriad ideas, but a wonderful cohesion.

In amongst all the bluster, the gorgeous “Survives” – which sees just Black and a piano initially before heading straight for power ballad territory –  makes for a stark jolt, Scorpion Child make it work, but then Scorpion Child make everything work with seemingly no effort at all.

So how do you follow a brilliant debut? By following it up with this, that’s how. Time will tell whether its better, but the suspicion is that it might just be – and that makes “Acid Roulette” incredible.