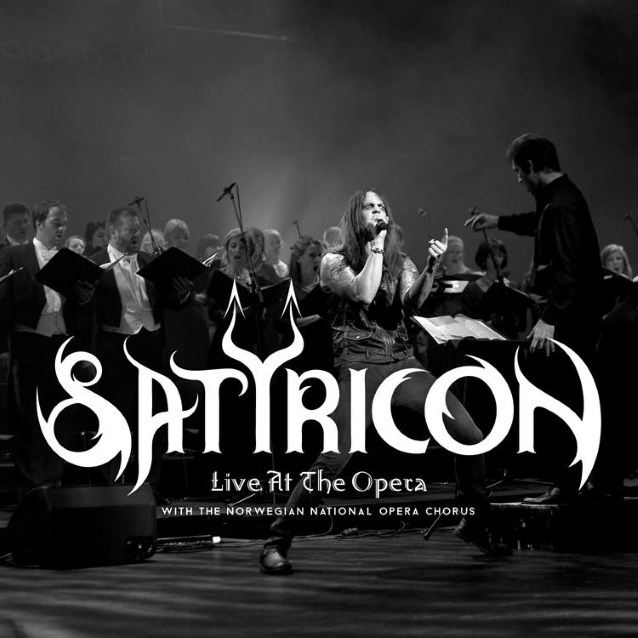 Satyricon have never been afraid to play outside of the black metal rules. Since their formation in 1991 the band have steadily expanded their vision to include more shades of dark then one might think possible. Aside from their first four releases, which could be regarded as sticking with the basic principles of Black Metal, there was always something about them and their style that separated them slightly from the corpse-painted crowd.

Live At the Opera, recorded on 8th September 2013 at Den Norske Opera & Ballet in Oslo, showcases a band in total command of their vision and authority. Accompanied by no less than 55 members of the chorus it is a black marker in the sand that in years to come may be regarded as somewhat of a significant moment in the band’s career.

Satyricon have a storied history and can call on eight albums worth of material with which to entertain. After a two minute opening intro entitled “Voice of Shadows” we are thrust into the demonic grandeur of “Now, Diabolical”. This classic track is given the full power treatment from start to finish.

Satyricon are not new to experimentation having worked with the Norwegian National Orchestra previously. That collaboration proved a huge success and so to does this. The Choir give a monastic chill to the experience which works perfectly with the cold and desolate power of Satyricon’s music.   “Nocturnal Flare” is a fine example of how this coming together leads the track to become more than the sum of it’s parts, as good as those parts originally were.

Other tracks like “Die By My Hand”, “The Pentagram Burns” and “Mother North” are lifted by the choral addition and taken to new unprecedented heights which will make listening to the original album versions slightly flat by comparison.

Unlike other orchestral/operatic unions the band have kept the essence of the music they have created and not altered it to fit the additional musical and vocal accompaniment. More like the choir have adapted to fit with the band. That’s the way it should be.

As for the DVD the lighting breaking through the dark and dry ice brings an air of menace that works perfectly with the ethereal nature of the band’s music. A black metal “Phantom Of The Opera” if you will. The sound, as with the cd, is crystal clear as the riffs tear through the speakers as if they are running from the thunderous beats of the drums. As you would expect the uniform is uniformly black. That really is the only colour required.

Of course, liking a live album pretty much depends whether you like the tracks or music on offer and whether the studio output is intensified and brought to life in the live environment. No complaints on that front. This is Satyr’s vision and it is well realised.

The rewards do come to those who are brave enough, chase them hard enough and keep going for long enough.