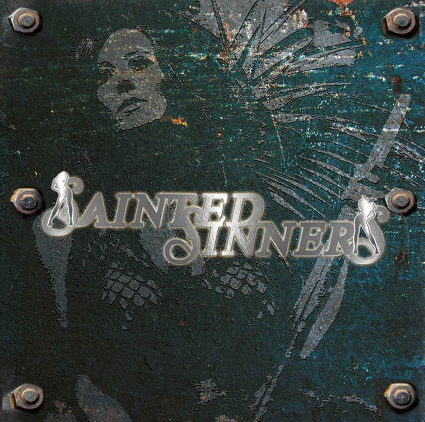 You do get almost cynical. It’s not as if you expect a band to say “this is our new album, it’s alright” on a press release, but sometimes you get a bit blasé to the more, shall we say, outrageous claims.

So it was that when Sainted Sinners debut 11 songs arrived in the inbox with the words: “Expressing the “pure essence of rock’n’roll”, was the ambition that paired five well-known and experienced musicians together in early 2016, to create and play the music which is deeply inside their hearts and in their blood. The love for rock legends, such as DEEP PURPLE, LED ZEPPELIN, RAINBOW, WHITESNAKE, UFO, BLACK SABBATH, VAN HALEN and many others, built the cornerstone for the music of the new founded five-piece called SAINTED SINNERS.” We, well lets be frank about this, were a touch sceptical.

Then we listened to it.

And, you know what. They aren’t far wrong.

Sainted Sinners is a supergroup of sorts. Singer David Preece was in Accept in the late 1980s and Bonfire more recently, others of them have been in various bands, but allow MV to make the suggestion that nothing they have done in their collective pasts comes close to being as good as this.

Sainted Sinners – that’s the album and the band – are stunningly good.

In fact, it is transparently clear from the off that everything they claim in the press release is as spot on as spot on can be. “Knight Of The Long Knives” sounds like Deep Purple playing a Whitesnake song (and here Preece, unlike David Coverdale, can really pull it off) and the whole thing is built around some incredible organ from Ferdy Doernberg (Axel Rudi Pell) and an chorus that has arena bothering in its sights.

From there, really. They set about checking those influences off one by one – and in so doing proving to be one of the most versatile Hard Rock outfit there is. “Beauty And The Beast” has a UFO thing going on, “Maybe She’s Got Balls” is down and dirty blues – Preece is even “looking for some strange” at one point – with superb soulful backing vocals.

It is a record where no two cuts sound alike. Their (near) eponymous effort “We’re All Sainted Sinners” is what it would have been like if Skynyrd had been a straight up rock n roll band – and lord what a hook it’s got – and “Blue Lightning Man” is balladry but not, really, as you might know it.

It is an album too, with huge intent. “The Love That I Have Found” is their “Kashmir” moment if you will, and “Did You” sounds like it could move mountains at the drop of a hat, as it builds into something quite spectacular.

Elsewhere, as on “In Need” it shakes its booty and gets downright funky, and it’s meant as a compliment to say the brilliant “Evangeline” – if it were written by Sammy Hagar era Van Halen – would have sold millions.

On this occasion, you can believe the hype. Although Sainted Sinners are a band so good they will create the hyperbole by word of mouth.