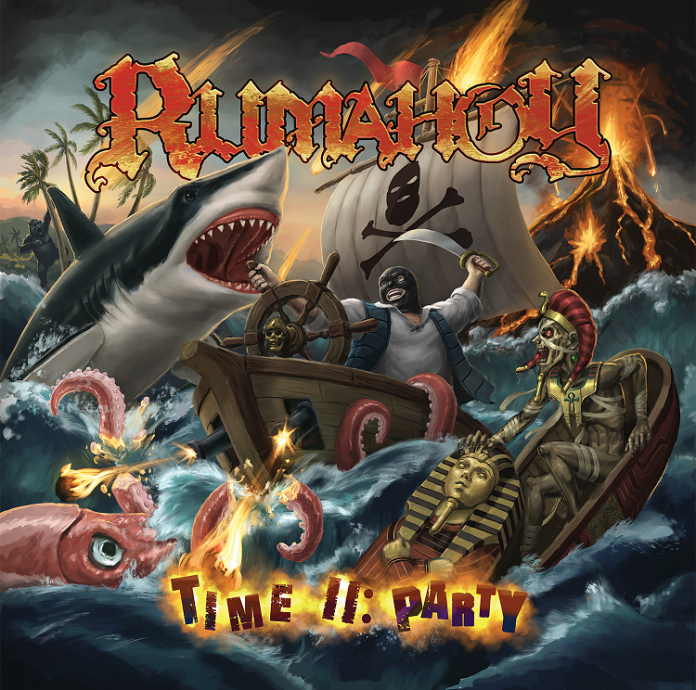 I feel I should seek help.

Maybe rent some space in a Church Basement and form a support group, I dunno. Maybe there’s an online course I can take? Maybe I can renounce my atheism and ask someone for forgiveness.

Or maybe I should just embrace the fact I love Pirate Metal? Genuinely adore it.

Now, I know now that a) I could never explain its appeal to people who didn’t “get it” b) that if I went to work and tried to explain it I’d get nowhere.

And that’s especially true of Rumahoy. Because Rumahoy are the sort of band that think Alestorm are too serious.

“Led by the mysterious masked giant Captain Yarrface (the greatest pirate in the world), Rumahoy is a pirate metal band like no other, with an unmatched live show featuring the best songs you’ve ever heard. Joined by Bootsman Walktheplank on guitar, Cabinboy Treasurequest on bass, and Swashbuckling Pete on drums.”

Ok, that’s got rid of most of the people in the world, the rest of us, are we ready to walk the plank and shiver our timbers? You bet.

“Cowboys Of The Sea” – which essentially centres around Yarrface’s new hat to go and plunder in – is rollocking good fun (and contains a discussion as to whether a Seahorse would be too slow to use to go across the seas) and its proper metal. The beat down in the middle. Move over Slayer (ok, maybe not, but its heavy).

“Time To Party” rocks an accordion like its never been rocked before, and they have come from Argentina well stocked (I think they are actually from North Carolina, but its best not to ask questions….) “Treasure Gun” keeps things simple “I’ve got a gun, its made of treasure, when I shoot you in the face it gives me lots of pleasure”, is its first verse, but if you are pre-disposed you will not resist its charms.

Like Alan Shearer on Match Of The Day Yarrface likes to talk about himself in the third person, and he enlists Christopher Bowes (he might be good at this pirate lark if he gave it a go….) to help on “The Legend Of Captain Yarrface” (the 80s keyboards here are worth buying the record for alone!).

Things get – I swear – even more ludicrous from here. “Harambe, The Pirate Gorilla” lives up to its title and then some and things hit the best/worst point (depending on your views) with “Poop Deck Party”. It’s disco. That’s the first thing to say. And the second point is this: you will enjoy it if you find the words “poop deck” and the idea of pirates flinging shit about highly hilarious. Bowes is back on this one too, rapping his tits off.

“The Beer From My Town Is Better Than Yours” dials the metal up, but dismisses the beers of the world quite incredibly. Bob Dylan got a Nobel Prize, but did he rhyme “yours” with “ugly whores” and did he ever suggest that Belgian beer was like drinking “toilet scum”? Did he bollocks!”

“1000 years Of Dust” sounds almost epic, – but does offer that Yarrface is the “greatest pirate in the world”  – and on “Full Mast”? Well, I am not going to lie here, I can’t think of a better way to put this, his mainsail is out and proudly swinging in the wind (and to be fair, the first woman he finds is dismissed thus: “I am Captain Yarrface, I am better than that!” Well quite.

The last one “Stolen Treasure” carries on the theme (not a shock!) that Rumahoy might steal their songs and your treasure but “if you sue, we’ll drink some rum”. Sorted.

This might be the best Pirate Metal Record ever released. Or the worst. It’s a fine line, I suppose. But as Yarrface puts it himself: “ We’re the greatest pirate band, in the fucking world. All those other pirate bands, make we want to hurl I’ll spew all over Running Wild. I’ll vomit on Red Rum. I’ll chuck my guts on Swashbuckle . And Alestorm are shit.”

That’s that, then? Well nearly, except to say this: You’ll love this, or hate it and that’s cool. Rumahoy are too pissed to care.