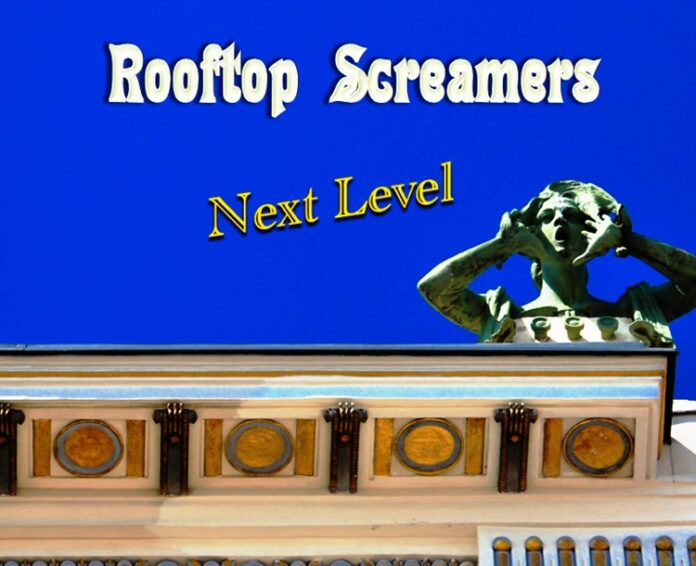 Rooftop Screamers is in principle a channel for Portland, Oregon based in-demand drummer Michael Collins`s song writing to gain an appreciative audience with guest singers and producers adding their stamp to his songs. Mike was the drummer and founding member of acclaimed Portland band Throwback Suburbia, who released two albums. Rooftop Screamers debuted with 2018 album Vol. 1, featuring collaborations with Ken Stringfellow (The Posies, R.E.M.), Kyle Vincent, and others. The Rooftop Screamers latest album `Next Level` was released late last year.

The album opens with `Buckle Up` which has one time Jellyfish and Sheryl Crow bass player Tim Smith guesting on vocals. It`s a gentle melodic pop offering which seems to be about that initial feeling when heading into a new relationship, just throwing caution to the wind, and going for it. There`s some sweet harmonies as well as a restrained guitar solo and swirling synth swathes on route. There`s another romantic themed outing with `Our Lucky Night` where Keith Slettedahl, singer in power pop outfit The 88 heads up the vocals on this breezy piano led offering. A quite reflective mid paced number that enjoys some corresponding vocal harmonies and another brief guitar solo just after the midway point.

There`s a much more power pop vibe to `One Wish` with guitarist Ken Stringfellow from the sadly missed The Posies on vocals. I loved their single `Definite Door` and did get to see them one time when they toured the UK. This track has Ken playing guitar, bass, and keys as well as supplying vocals with Michael Collins keeping it all in check with his rhythmic drumming.

A captivatingly dreamy sort of out there track. We have a really mesmeric number in `Shifting Tides` where Cy Curnin, singer with English new wave rockers The Fixx adds his distinctive and really eloquent vocals. It`s a composition that had me drifting off in a pleasantly thoughtful reflective haze.

`Tearin` it Down` is a cracking Bluesy submission that singer Dilana really makes her own. We have some blistering guitar riffs from Earl Slick yeah of Bowie, John Lennon & Yoko Ono fame and some deliciously subtle piano and organ tinges from Danny Peyronel who has graced UFO and The Heavy Metal Kids. This lady has a superb vocal range and I have to say i`m really surprised as to why she isn`t a massive star. I have to say i`ve seen Dan Reed a fair few times and didn`t realise that Rob Daiker was the band`s current keyboard player. As an accomplished musician he puts his guitar, bass, and keyboard skills to good use on `The Ladder`. It opens quietly but bursts into life with real vigour. It`s an enthralling melodic rock outing where the drumming really drives the number forward. I admit, I had this track on repeat a number of times before moving on, watch out Dan Reed you have another gifted vocalist in your band.

`Your Day Will Come` is a marvellous earworm of a track which has David Paton delivering the vocals. David is / was the lead vocalist and bassist of Pilot who sang a song that I love called `January`, a timeless classic that I drove my wife nearly insane with by putting it on every juke box I ever see it on. The guy still has a wonderfully rich vocal range and it has been really brought to life with the twinkling keyboard talents of Gil Assayas, one time touring member for Todd Rundgren. Michael Collins himself steps up to take on the vocals for `Couldn`t Ask For More` which is a real toe tapper of a tune which may well have you singing along by the end. It was a real band number with keys, guitars, a guitar solo, drumming and a shook tambourine all vying to get into the mix.

`Favorite Waste Of Time` has Dan Reed guesting on vocals and what can I say? I love this guy. He could sing the telephone directory and it`d be class. I got to see him numerous times back in the late eighties / early nineties when `Ritual`, `Rainbow Child`, `Doin` the Love Thing` and `Baby Now I` where constantly on my record deck. I last saw him in 2019 with Gun and FM and he still has the chops. Here he shares a dreamy power ballad with that silky lilt he has in his voice. I`ll take the higher ground and accept the American spelling in the song title as it`s The God like Dan Reed belting it out. The album closes with another ballad `After The Fire` which has Stephanie Schneiderman who is part of the indie trio Swan Sovereign (previously Dirty Martini) on vocals. Brian Harris`s keys really lay the foundation for Stephanie`s vocals to soar atop and really bewitch us.

I really enjoyed not only the concept of how `Next Level` was put together and structured but also enjoyed hearing a variety of singers, musicians, and styles, some that were not familiar to me and which I’ll be investigating further. There were other musicians that were integral to Mike in bringing his vision to life with Kevin Hahn, Todd Braden, Dirk Sullivan, Darcy Bradley, Mark Plati, Don Schwarz, and Kelly LeMieux.

`Next Level` really did take it to the next level and deserves much wider coverage.