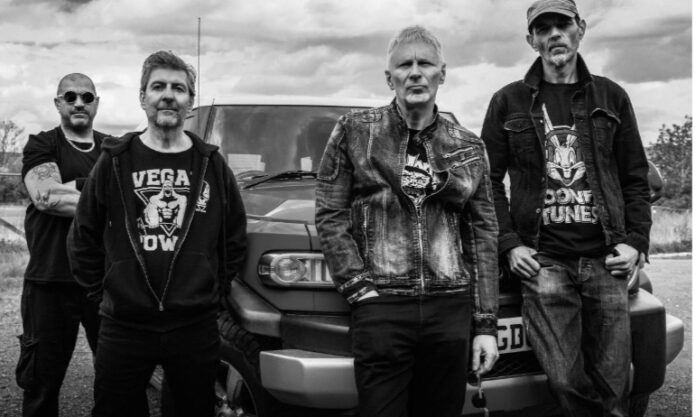 RT-Zed has completed their latest album, ZedNation, available for pre-order on February 28th on the band’s website at rtzed.com, with shipping commencing on April 28th 2022.

RT-Zed was founded by Steve Grantley and John Magner in 1998. Steve is the drummer with the legendary Irish punk rock band Stiff Little Fingers. Steve was also a member of stadium rockers The Alarm, and has worked with Billy Duffy of The Cult, Glen Matlock of The Sex Pistols, Kirk Brandon’s first band The Pack, Craig Adams of The Mission and Sisters Of Mercy, plus Julian Lennon and soul singer Oleta Adams.

The 4th studio album from RT-Zed, ZedNation, features Grantley (guitar, vocals, drums), along with guitar players Jonesy and John Magner plus bassist Jamie Alleyne. This is a return to the gritty rock ‘n’ roll approach of their album Zed Hed, after the more funk-flavoured album FUNKPUNK and industrial debut Return To Zero.

Not being on the road with Stiff Little Fingers gave Steve time to write consistently and then work on the album in a few solid weeks. He was pleased to welcome founder member and co-writer John Magner back into the Zed fold and to once again record with bassist Jamie Alleyne.

ZedNation is a “zombie noise apocalypse with a touch of ABBA,” jokes Grantley with a hint of irony. “We like to make melodic noise; we love NYC 70s art rockers Suicide, The Cramps, White Zombie and Burt Bacharach.”

Steve gets some resistance fronting RT-Zed. “I think certain people think drummers should know their place,” but says, “Fuck it; Dave Grohl, Phil Collins anybody?!” Additionally Grantley asserts, “Many of the supreme songwriters played drums—Stevie Wonder, Pete Townshend, Paul McCartney, Josh Homme, Lenny Kravitz—they all play great, and it’s not that uncommon these days for drummers to come to the fore.”

Steve has consistently written for Stiff Little Fingers over the years and co-wrote The Alarm’s last big hit “45 RPM” with lead singer Mike Peters. “I’ve been writing songs since I was 12, but I’m best known as a drummer. This album will hopefully change this preconception.”

The album will be released on Hypermania Records, available for pre-order February 28th 2022 on all formats on the band’s website and on all other good music platforms.

The band plans to play a few dates in the spring of 2022, including Westworld Weekend in the UK with Kirk Brandon (Spear of Destiny, Theatre of Hate, The Pack). Check the band’s social media pages and website for updates.