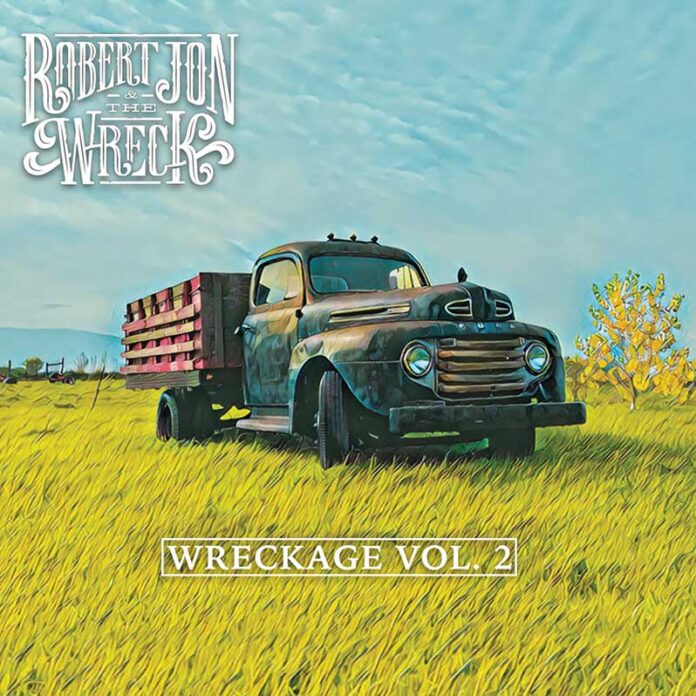 People often say things to you like: “Which song would you recommend to someone to sum this band up?”

It’s a tricky one with Robert Jon And The Wreck, but on “Wreckage Vol 2”, you’d probably have to plump for “Something To Remember Me By”.

The reason is that not only is it fundamentally not like any other “Southern Rock” flavoured band around – given that it struts its funky stuff, then comes the words: “Hey Henry, let me hear you!” And with that, along comes Henry James to do what Henry James does. He is a stunning lead guitarist, and as much as Robert Jon Burrison is the leader, it’s the “And The Wreck” part that combines to make them special.

“Wreckage Vol 2” isn’t a “new” album as such. It’s a collection of In-studio and live performances from 2020-22. Now, I can’t say I sat in front of my computer in the lockdowns and watched the streaming thing. Music to me is real, its live and its organic. Everything that social media isn’t, but I can tell you that the seventh gig I saw when they resumed last autumn was RJATW in a little venue in Nottingham, where they destroyed the place. Plus I can also tell you I saw them this spring where “She’s A Fighter” proved itself to be formidable.

It kicks off here too and “Waiting For Your Man” absolutely lets its hair down. You’d best believe that this is a special band in a way that few are. They seem to have an absolute understanding of what they’re doing. Whether its James’ guitar or Steve Maggiora on keys or any of the rest, each member does something to add to the mix.

“Rescue Train” is one of their oldest songs, but this version was recorded in February 2020, you know, just before the world went crazy and no one could do what they loved anymore. Hearing the hope in its words almost makes it poignant.

There’s a genuinely brilliant cover here too. “The Weight” is a song that has already achieved perfection, so you aren’t going to better it, but what you can do is give it your own twist and that’s what RJATW have done.

In a lot of their songs there’s a darkness. This isn’t a cookie cutter world of small towns, marrying your best girl and rooting for the home team on the backroads in your truck. Nowhere is that more starkly shown than on the recent single “Old Hotel Room”. It’s the first line that hits you. “I got this old hotel room, cocaine and a minibar” RJ intones matter-of-factly and maybe it isn’t all glitz and glamour on the road?

“Dark Roses” is a beautiful ballad – recorded on the same day as “….Room” and shows perhaps better than most, the depth of this. Because, “On The Run” is at the other end of things, the “heads down, lets go rock n roll” end.

There’s a couple of jams too. “Cannonball” and “Witchcraft” are both mighty slabs of music, played by a band that is utterly and completely on top of their game, but who seems to get lost in the moment. I’d wager that no two versions of these tunes are ever the same.

Robert Jon And The Wreck are one of my favourite bands of the last five years. But when I reviewed the gig this May I proclaimed them to be “the new kings of Southern Rock” and was questioned on Twitter as to whether they are a southern rock band at all. The truth is they probably aren’t, but its an easy hook to give them. They are a band that simply belongs in whatever box you want to put them in, but who would take great pleasure in not fitting in anywhere. Basically, you choose what you think they are, I’ll just say they are stunning.