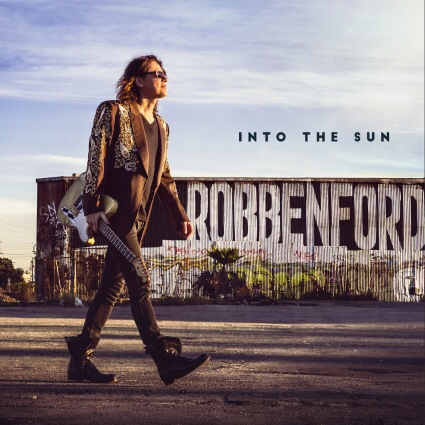 Guitar legend brings out the guests on varied collection

Let’s blame social media this time. It’s normally best to blame Simon Cowell but then we always do that. The word “legend” is bandied about with such abandon that it’s basically lost it’s meaning. Last week, you may have seen, some kid left a boy band. Not only was he routinely described on social media as a “legend,”  but apparently employers were inundated with staff wanting time off due to the grief they were experiencing. Assuming (please!) that these idiots don’t read these pages (and also that they were sacked on the spot…..) we’ll also assume that they won’t know who Robben Ford is.

Ford, you see, is the type of guitar player that guitar players respect. He is – with all due disrespect to One Direction – a real, proper bonafide legend. Over the years he’s played been the sideman of Miles Davis, Joni Mitchell, George Harrison and other, well, legends. He’s made 35 albums as a solo artist – “Into The Sun” itself is the successor to last years “Day In Nashville.” Then there’s also Ford’s session and sideman work, which includes hundreds of concert appearances and albums by Bonnie Raitt, Barbara Streisand, Charlie Musselwhite, KISS, Ruthie Foster, Jimmy Witherspoon and Rickie Lee Jones. Quite the career, huh?

Which means in this collection of 11 understatedly superb songs he’s able to call on some pretty famous people to join him in his endeavours. Blues Icon Keb’ Mo’, Vocalist ZZ Ward, Warren Haynes, Sonny Landreth,Robert Randolph and Tyler Bryant are all very present and very correct here.

Things get going with the rich acoustic tone of “Rose Of Sharon” and a varied album takes in the funky sound of “Day Of The Planets” as well as the Southern Rock of “Rainbow Cheer,” which is complete with swirling Hammond Organ.

Keb’ Mo’ adds his unique tone to the bluesy gospel tinged “Justified” and Ward’s offering of the duet “Breath Of Me” is quite simply a gorgeous love song. As befits his career, Warren Haynes adds an eclecticism to “High Heels And Throwing Things.”

However, despite all the guests it’s “Cause Of War” that perhaps takes the honours here as the absolute show-stopper. It has a huge groove, some fine playing and a glorious chorus.

The true skill on “Into The Sun” though, is that while the musicanship is superb, it remembers not to overplay and never feels like an exercise in wizzardry at the expense of a song and even when another player is added, as on “Stone Cold Heaven” which sees Ford joined by Tyler Bryant, the music retains a wonderfully accessible warmth that others might not be able to create.

“…..Sun” is a mighty fine collection. Robben Ford has declared himself delighted with it and says it’s one of, if not the, best things he’s ever done. That’s quite a statement, but one which is more than backed up by the music. Ford lives up to his legacy as a legend – and we know what that word means.