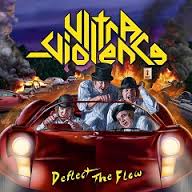 Italian purveyours of thrash run like clockwork on second album.

Turin thrashers Ultra-Violence have been busy men since their formation. First up was The Wildcrash EP released in 2012 and was quickly followed by their debut album Privilege To Overcome the following year to rave reviews. This time the band have pulled out all the stops to make a statement. If you think Thrash is all about the Big Four then it’s time for a re-think.

One vital element of a good thrash band is that the players must be as tight as a nut. The hard-edged rhythms and tempo changes that make up your modern day thrash outfit requires are all apparent on this release.

This is everything you want in a modern thrash album, from razor-wire riffs to thundering rhythms and screaming vocals, there isn’t much in the genre that they don’t cover, but boy do they cover it well. Much like early-era Metallica there is enough variation in their music to see them become a force in the metal world in the foreseeable future. No two songs sound the same, a tricky feat to pull off for a thrash band!!

This album is a serious kick to the yarbles followed by a punch to the guttiwuts. Take the opener “Burning Through The Scars” as evidence. It’s old school thrash metal at its most potent. Slayer-like anger driven by early-Metallica riffing provide the tempo to the soundtrack of their life.

“Gavel Bang” slows things down just a touch but the intensity and heaviness is still there. The quality tunes just keep on coming “In The Name Of Your God” throws you around the room like a lunatic before a brief 6- second interlude via “a Second Birth” creates an uneasy calm before the continuing storm. “The Checkered Stunt” throws you straight back in the eye of the said storm and generally throws you out just in time for the album closer “Fractical Dimension”. They have saved the best for last with this outstanding full-throttle assault on the senses.

Loris Castiglia has the thrash vocals nailed whilst lead guitarist Simone Verre shows the old-stagers a thing or two when it comes to guitar solos.

Viddy well, my readers, viddy well. Given the right coverage this band will be headlining venues across Europe before you know it. So get yourselves ready for a bit of the old Ultra-Violence!! You have been warned.