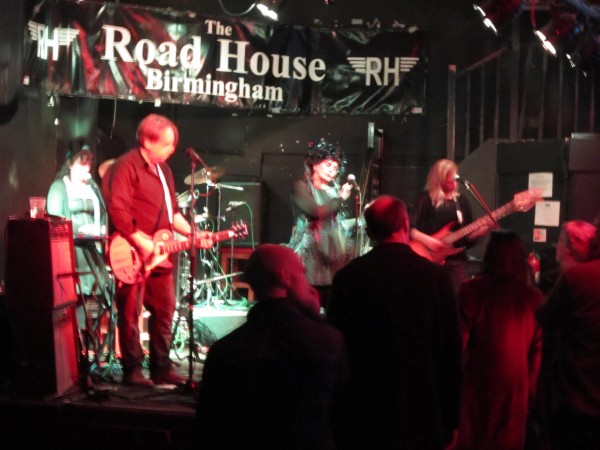 Lene Leaves the Roadhouse agog, and Damian meets her after 35 years

Arriving at the Roadhouse there are quite a few people hanging around the bar area.

The reason is that the sound check is still in progress. A few screams can be heard, which is an indication that Punk Chanteuse Lene Lovich is in the house.

The doors eventually open to reveal a lady on the stage, who turns out to be Kirsten Morrison, the keyboard player in Lene`s band. A quick introduction and she launches into three of her own individual numbers with her distinctive vocals. The first being “she walks in shadows” accompanied by a backing track and playing a type of hand held harpsichord. “Still do you leave me” and “Marie Antoinette” close out an enjoyable interlude with the former being helped along with Kirsten clicking her fingers.

Tonight’s main supporting bill, Vix and her Mschiefs arrive. The more mature gig goers will remember Vix from her time leading a great band called We’ve Got A Fuzzbox and We’re Gonna Use It!!, who, in my opinion were the first purveyors of “Girl Power.” Eat your heart out Victoria Posh, our Vix is the real deal! I’ve been lucky enough to see a few musical happenings with this lady and was looking forward to seeing this troupe for the first time. The band consist of Vix on lead vocals and Ukulele, Immi on double bass and backing vocals, Mimi on guitar and backing vocals and Nemi on violin.

The one thing that Vix has over the years is a consistently rich singing voice and this Country / Americana version brings out the best of it. The band seem really happy with each other and enjoying themselves, which encourages the audience to relax and feel at home with them.

A shortened set tonight starting with “All The Way From Birmingham”, a new song called I think “Stepford Wives” are aired before we get a version of Janis Joplin’s “Mercedes Benz mixed in with “Keep on the Sunny side” The debut single “If Fame is your driver” follows before we get a fuzzbox classic “Rules and Regulations”. “Let’s Pretend” a Patsy Cline type ballad and to finish another fuzzbox song “Pink Sunshine” to round it all off nicely.  An excellent set which leaves us all with a smile on our faces. The band are trying to raise funds through a pledge campaign for a variety of goodies. I would urge you to invest your money, it will have been well spent!!

On to the main event and the band comprising Subterraneans frontman Jude Rawlins on guitar, bassist Valkyrie , keyboard player Kirsten Morrison, and Morgan king on drums  take their positions and start the intro music. Ms Lovich dramatically arrives on stage from the stairs leading down from the dressing room.

Straight into “Blue Hotel,” then “It’s You, Only You” on which she plays a black trumpet, “I Think We’re Alone Now” and “Angels” follows before “You Can’t Kill Me” a reggae style number is offered up. Next up is “Carry on good night” and “New Toy” before the wonderful “Lucky Number” is played. “Say when” and “Wicked Witch” are aired before “Light” closes the set. A short break before the encore of “Too tender (To touch)” a romantic song Lene tells us, “Moro Perche Non Moro” and finally “Home.”

This was a wonderful night of music covering alternative, Goth, indie, new wave, pop and post punk. Something to please everybody. After the show Lene and the band were happy to sign mementos, pose for photos and selfies with the few that remained behind.

I managed to get my ticket from the Birmingham Odeon on October 22nd 1979 signed. Lets hope it’s not another thirty five years before I get to see her again.