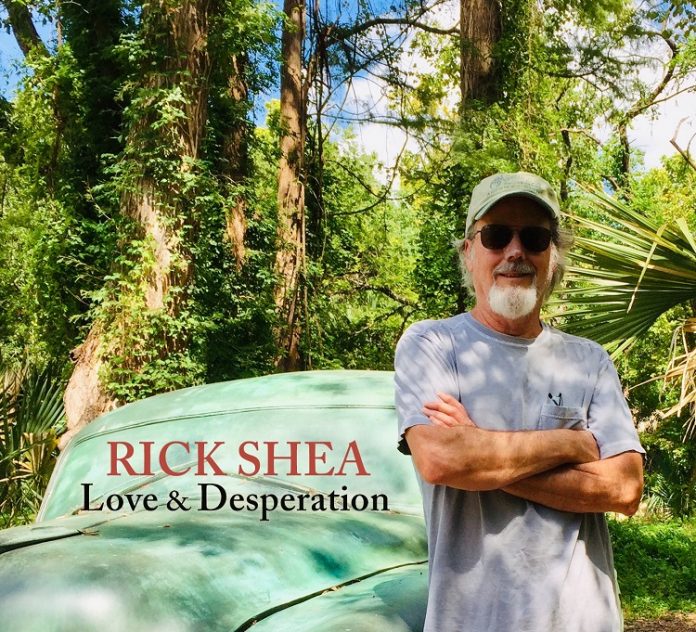 A few years ago I wrote a review of Rick Shea’s “The Town Where I Live” record, and on the design for the website back then it had a sub-headline: “somewhere in middle America” it said – and not just because I’d probably listened to Counting Crows that day.

No, rather it was an album that dealt – superbly – with the minutiae, the idea that wherever you are from, you basically face the same struggles, but as long as you find a place – find your place – then the world is fine.

As the title might suggest, there are some weighty themes on “Love And Desperation”, but one song sticks out. “Nashville Blues”, where he muses on the likes of “Hank and Johnny George” who got their start there, before concluding that “its also where their lives fell apart”.

That sums Shea up for me. He’s fabulously talented, with a wonderful gift for writing songs, telling stories and playing, but there’s a warmth, a contentment about him that suggests he’d be the guy at the folk club with the battered old guitar and a ready tale or two and never mind the fame.

As ever the word “pandemic” hangs over this and “Love And Desperation” was changed from its original players, and its original plan as lockdown and restrictions hit. It is remarkable, therefore, that it sounds so warm and organic.

The bands take on “Blues Stop Knockin’ At My Door” is a case in point. I grew up with Elvis records never far away and a particularly well worn one was “Elvis Country”. This – with its glorious accordion – is the same vibe.

Blues, both in the title and the feel of the songs, dominates. “Blues At Midnight” has a classic feel, but even better is “(Down At The Bar At) Gypsy Sally’s”. Shea at his best. Evoking some drinking den in the prohibition era, the bar owner with a “shiv” and all kinds of nefarious characters, it is a slice of what this record is about.

The title track is simple, and simply glorious blues, and Shea possesses one of the great voices, he really does, and “She Sang Of The Earth” set in a “nowhere place” couples it with some mighty lap steel too.

Having listened to this album a few times over the last month or so (I’ve learned from experience that Shea is an artist who’s records you need to live with for a bit) the hooks, the light and shade if will, are beautifully understated. “Big Rain Is Coming Mama” finds its way in, in a way you didn’t imagine (and is perhaps the only song in recorded history with the words “close up your windows and bring your chickens inside” at its heart) but its tale of poverty in the heartland is almost Steinbeck-esque.

There are few songs on here that are clearly more personal than the rest. “A Tenderhearted Love” is written for his wife, for example, while “Juanita (Why Are you So Mean?” borrows its title from the name of his wife’s mother – but the Latin flavours take things into a different area, somewhere by the Rio Grande, perhaps.

“The World’s Gone Crazy” will resonate with anyone who has to deal  with 2021, but for that, then maybe the antidote is “Mystic Canyon” a gentle  instrumental that you can lose yourself in.

“Texas Lawyer” continues with Shea’s theme of interweaving the work of Elmore Leonard in his songs. Somehow the narrative style suits him perfectly.

Rick Shea comes from a long line of troubadours. Comparisons with Townes Van Zandt are obvious, but they are welcomed too, have no doubt. To find a fresh twist on an old theme is a real skill and on “Love And Desperation” it is done with real panache.