REVIEW: RAVEN – SCREAMING DEATH FROM ABOVE: LIVE IN AALBORG (2019) 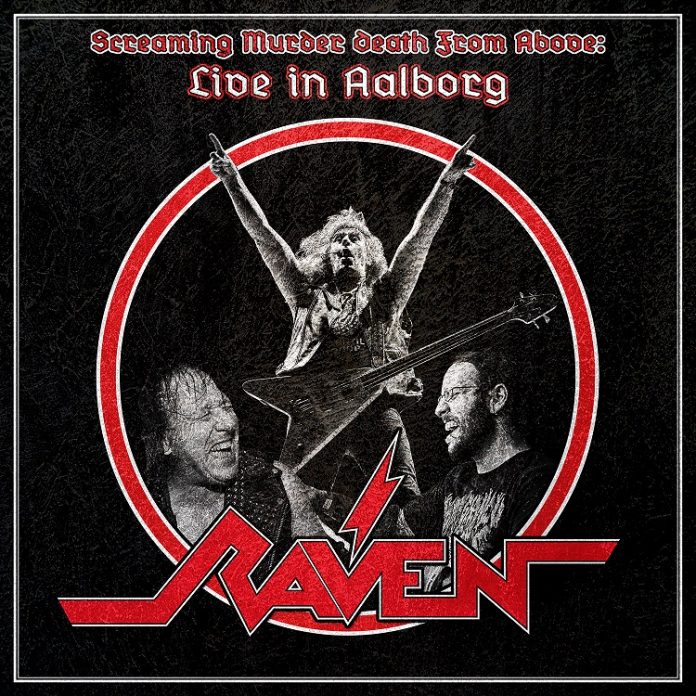 A boxing gym in the East End of London might seem an odd place to begin a review of a live album recorded in Denmark by a Geordie metal band, but nonetheless, there we are.

I was watching a documentary film the other night about a fighter called Johnny Greaves, he fought 100 times, only winning four times, but was reckoned to be one of the toughest opponents for the up and coming Light Welterweights. The world wouldn’t function without these type of people, the unsung, the reliable, those who can always turn up and give their best.

Raven, really, are the equivalent in metal. Never quite hitting the heights of some of their peers (or that their talent maybe deserved?) rock’s own Gallagher brothers are the journeymen.

Like the bit in the film about Greaves, where he was in the pub with his mates on a Saturday and ended up fighting that night and still went four rounds, Raven didn’t even know this performance had been recorded. Would it have mattered if they had? Would it have sounded different? Would it have been any less committed? No and no. Raven only know one way.

And for almost an hour that’s exactly what they do here. Right from the opening screech of “Destroy All Monsters” they do what Raven do. They are leather clad, some hybrid of Iron Maiden’s debut and an early thrash album – and it sounds ace.

The rarely played “Hell Patrol” is both fresh and positively evil sounding, “All For One” sees new drummer Mike Heller to the fore, but it’s the duo of John and Mark Gallagher that have always piloted this band and they always will as long as there’s life in these riffs.

Mark’s lead guitar has always been one of the most underrated around, and in the likes of “Hung, Drawn And Quartered”, “Rock Until You Drop” (the title track of their debut record) and his solo “A.A.N.S.M.M.G.” he proves it.

“Tank Treads (The Blood Runs Red)” (“a tender little ballad”, deadpans John) chugs with huge menace, “Faster Than The Speed Of Light” is absolutely rooted in the sound of the early 80s, and resolutely proud to be too – and goodness me, how the drums thunder here!

“On And On” is delighted to get fists up in the air – and the thought that they are a three man army isn’t far from the mind considering Gallagher yells “you’ve paid your money, you’ve gotta have a good time….!” At one point.

“Break The Chain” is essentially what British Heavy Metal should sound like, and “Crash, Bang, Wallop” is as simple as its title suggests but is way more effective and it seems them exit the stage knowing they’ve done all they can do.

Except, it wasn’t. Then someone told them there was a Flash Drive with the recording on and that brings us round full circle.

Lets be honest – Raven aren’t ever going to make the metal premier league, but just like Johnny Greaves – who celebrated the win in his 100th and last fight with his children in tears in the ring – they deserve a moment. “Screaming Murder Death from Above: Live in Aalborg” is just that. Their third live album, and its their best by a long way.

Previous article
BAND OF THE DAY: HAWK AND DOVE
Next article
ARTIST OF THE DAY: CAROLINE JONES