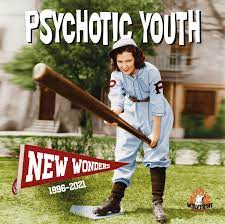 Psychotic Youth are a Swedish power pop / punk pop band formed by singer, songwriter and guitarist Jörgen “Red” Westman in 1985 as a garage rock band, the music then switched to power pop, surf and harder elements that took influences from Detroit’s punk scene in the 70’s. But their characteristic sound has always been their melodic tunes and choruses. They have a new album, a compilation called “New Wonders 1996-2021” which includes a bonus of four Abba covers out this month.

We kick off with `I`m Still Waiting` followed quickly by `On The Route Again` songs that really had a punk heart and a sort of new wave feel of bands like The Motors or Eddie and the Hotrods.

`Can`t Call On Me` retains that new wave edginess while `Take Him For A Ride` had a catchier retro rock n roll style. `Takes You Down` was a kind of garage rock jaunt that blasted off at about 120mph while `You` was a straight melodic rock pop outing.

`Nr 1 In My Heart` was a sort of enticing Ramones ish love song which will have you singing along towards the end. I thought there was a punkish Boomtown Rats texture to `Kingdom To Be Found`. `Transition Love` is a cheesy punky summer pop song, kind of boy wants girl and has some really appealing blistering guitar riffs on route. There was a more heads down non nonsense Ramones vibe to `Mumble` short, smart, and simple.

`Let It Go` is a fast paced rock number with a churning guitar riff throughout. There`s similar with `Burning For You` but with a bit more power pop thrown in. `Good Live` had a weird but compelling synth that opens this stop start retro rock out. The synth pops up occasionally throughout this number. This time we have a crazy odd ice skating rink organ sound on `The Voice Of Summer` a punky rock composition with Beach Boys type harmonies. Wonderfully compelling. `Home Alone` has a rolling guitar riff, echoey, breathy vocals and a beguiling chorus that will have you singing along to. There`s a similar feel to `Girls Out Of Reach` but it does have a mid-section that takes on a short reggae like detour. `Keeps You Running` returns to the fast paced rock outs of previous numbers but with vocals that are almost spat out. A much heavier submission is shared with `Ain`t got No Dough` and if it was any heavier it could end up being the companion to Motörhead`s `Ace Of Spades`.

`Talk To Loretta` opens with a driving drumbeat and repetitive guitar riff and is a boogie like offering that could have come out of a Status Quo set. The final track on the album is `Let The Kids Dance` with bashed piano keys. A real fifties rock n roll tribute in a style between that of Danny and the Juniors` `At The Hop` or Chuck Berry`s `Roll Over Beethoven`.

There is a bonus of four covers of Abba classic hits `SOS`, `Super Trouper`, `Does Your Mother Know` and `Mamma Mia` given Psychotic Youth`s very individual but nevertheless delightful own interpretation and stamp.

There was so much to relish with this snapshot of Psychotic Youth`s career and with around seventy minutes of music, they`ll be something here for everybody to enjoy. Their songs are wonderfully melodic and have choruses and hook lines that may have you singing along or indeed humming for the rest of the day long after hearing them.