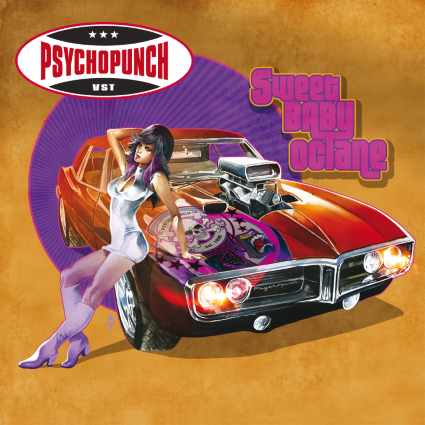 Remember the late 1990s when Swedish bands were the Kings of Rock n roll? So do Psychopunch

All you need to know about “Sweet Baby Octane” is revealed in the first 14 seconds.

There’s an intro, you see, and this is what the woman’s voice who narrates it says: “Welcome to the Psychopunch Speedway. Where women are real bombshells. And men get to be cool track daddy’s. Now buckle up and enjoy the ride.”

If you need anymore elucidation on the subject of this record, then you are clearly unfamiliar with the concept of rock, and indeed roll come to that.

But anyway, if you take a dash of the Backyard Babies, a pinch of Motörhead, add some Supersuckers to taste and mix it with a whole heap of punk rock sneer and the greased up gang mentality of John Travolta in Grease and you are somewhere close to what “Sweet Baby Octane” sounds like.

Psychopunch largely can’t be arsed with a Plan B. Plan A is just fine. So “I’ve Been Around” races out of of the speakers and if you don’t get out of its way it’ll run you down and reverse over you just to see the tyre tracks.

This is a world of fast women, faster cars, drinking with the boys, and worrying about the consequences in the morning, in short it’s the soundtracks to all those parties you never went to, and probably don’t exist except in the autobiography of Lemmy – and that’s just “On A Night Like This (Hell Yeah!)”, you assume the brackets are added for extra hedonism, either way, it’s the purest rock n roll entertainment you could wish for.

That’s the point too, those looking for social conscience can look elsewhere, there’s a duet of “Forever And Day” and it’s as ebullient as Meat Loaf and Cher back in the day. “Turn Up The Radio” is as self explanatory as it gets, and “So High” actually starts off like it’s going to ape Nirvana, then gives that up in favour of chugging fun.

There’s just once when “…..Octane” eases off the throttle, and if “Drinking Alone” seems to admit that the music just occasionally might mature, then “What Did I Say” with its echoes of an early Wildhearts b-side eschews that in favour of a good time.

There’s an outro too: “Villains and vixens”, says the voice. “Thanks for listening in. We hope you enjoyed the ride. See you on the road.”

And you can bet your life that would be fun.

“Sweet Baby Octane” is completely unashamed of being dumb rock n roll fun. And there’s nothing wrong with that – or it – at all.