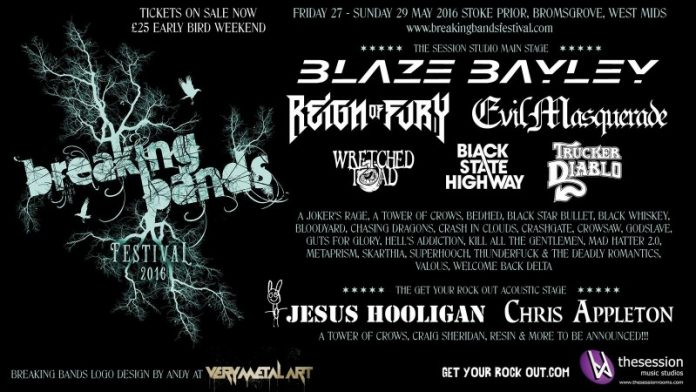 Incredible line-up set for Bromsgrove next May
With 7 months to go until the 2nd year of Breaking Bands Festival, there is a buzz around the music community that this is a festival that has now cemented its name into the festival calendar. After confirmation this week of the festival being short listed at the UK Festival Awards for ‘Best New Festival’ what better way to follow that up than with a Halloween announcement of the final 9 main stage bands.
The build up has been quite fantastic with so much info coming through about next years event. The organisers added a massive 40% onto next years capacity as the venue has become bigger with a recent refurb but that hasn’t added the pressure you would expect as the festival is now 30% sold out included the increased ticket allocation.
So, the final main stage line up is announced with an additional 9 bands added and the sub headliners confirmed for each day.
Kicking off the video announcement was Crawley/Horsham’s punk rock band BEDHED which was followed by TBFM Records signed BLACK STAR BULLET, a hard rock band based in Coventry. Staying in the Midlands, next band announced from Birmingham is VALOUS. As organiser Mucka Jay said “we chose Valous as they are a great band who came and supported the 2015 festival. As part of our promise to support the scene we said any band who buys a ticket to watch this years event will be first on the list for next year” and he kept that promise.
A late addition to the festival after grabbing their place at Hammerfest next year, the organisers instantly booked York rock/metal act A JOKERS RAGE who are a guaranteed party piece with their energetic songs. Back to the Midlands, a band who the organisers have recently been on tour with (along with Black Star Bullet) is Wolverhampton’s answer to Iron Maiden in GUTS FOR GLORY who will bring a great array of classic metal sounds.
Next up is a band led by a man who once was frontman for epic metal act Xentrix. From London comes a great classic rock band called BLACK WHISKEY. Following on from them is another hard rock band, this time heading in from Leeds. A band who have said recently they have played in front of 5 people and 10,000 people but they are still here for the music. Brilliant band called CHASING DRAGONS.
Recently on tour with the band Clutch is a blues rock band from Bristol just to mix things up a bit. The band are WELCOME BACK DELTA and are sure to give some awesome dirty blues riffage at the festival.
That just leaves one band… they are from Northern Ireland and have played with Foo Fighters, Black Stone Cherry, Terrovision, Quireboys, Anthrax and the final farewell tour with Thin Lizzy. They also have accolades such as Hard Rock Hell, Hammerfest, Steelhouse Festival and Download Festival too. Personal friends of organiser Mucka Jay it was “a must have band for the festival” and therefore announced as sub-headliners for Saturday night… TRUCKER DIABLO.
To round off, Mucka also confirmed the sub-headliners for the weekend as Wretched Toad (Friday), Trucker Diablo (Saturday) and Black State Highway (Sunday).
There promises to be a lot more news and announcements with the Get Your Rock Out Acoustic Stage still to be filled so keep watching. Tickets on sale for the weekend at www.breakingbandsfestival.com/shop